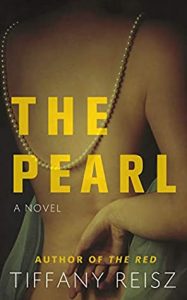 When Lord Arthur Godwick learns his younger brother is up to his bollocks in debt to Regan Ferry, owner of The Pearl Hotel, he agrees to work off the tab…in her bed.

When I first discovered Tiffany Reisz was writing another book in The Godwicks series – I screamed in elation over the prospect of what juicy tidbits would lie between the covers of this new release. The Godwick family never disappoints, and The Pearl was no exception!!

Taking care of family business doesn’t always work out the way you expect. For Lord Arthur Godwick, cleaning up after his brother’s mistakes this time will come with more consequences than imagined. The family’s prized possession – a famous painting that hold more history that can be imagined it now in the hands of a hotel owner. Lady Regan Ferry owns The Pearl and has no intentions of letting the Godwick’s family painting go for any amount of money.

After a bit of bartering, Lord Arthur made a deal that no one would expect. An agreement to spend ten night in total debauchery to pay off his brother’s debt. No exceptions would be accepted. Now that Regan has shared with Arthur that she is a widow who was lost in her marriage for a long time, the temptation of what these next ten days might hold was exciting. Regan holds her own reasons for wanting to posses the painting, and it fuels her just as deeply as Arthur. When the dice is rolled who will come out on the winning end of the arrangement??

The Pearl is a fascinating glimpse into the life of Lord Arthur Godwick and his family legacy. Godwick’s mother and sister held their own place in the two previous books of the series, and this family member will not be outdone. While The Pearl is written after The Rose and The Red, you do not have to read those books to understand the happenings in the series.

Just like The Rose and The Red, I found myself submerged into this world of art, history, and mystical eroticism. Simply put……I loved everything that The Pearl held in store for me as a reader!! Revenge is a dish best served cold, but in this case it was steaming up the sheets!! Discover the secrets that lie in wake at The Pearl, and enjoy some lessons of the sexual persuasion while visiting this establishment. I know I am going back for a repeat!!

“Get on your knees,” Regan said.

She said it so he did it. Arthur released his grip on her pearls and went down onto his knees in front of her. As soon as he was there, he realized this is where he’d wanted to be all along.

“I just…don’t.” If he could have waved a wand to make it go away, he would have waved it like a drowning man signaling for help. Once Regan was done with him, who would treat him like this? Who could he trust to tell that he needed it? Where would he begin to find someone who made him feel what Regan did?

“Who told you this was wrong?” she asked him.

“Someone must have gotten it in your head that this, what we’re doing, is wrong, bad, the sort of thing real men don’t do? Who was it?”

“Nobody. You know the Godwicks. We’re one big happy whoring family.”

Regan stared him down, but he refused to be goaded into answering.

“Do you want to keep glaring at me,” he asked, “or do you want me to make you come?”

“Well, when you put it that way,” she said and finally smiled. Then she grabbed him hard by the chin, hard enough he knew she’d leave red marks from the rough grip of her fingers. “But make it good.”