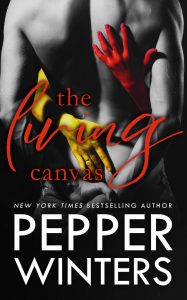 “Must be brave, stubborn, and impervious to the tempers of loved ones.”

The first line hissed with history.

The second line ached with truth.

“Able to function on no sleep, refrain from running when times get hard, and be more than just a living canvas but a lover.”

The third thrummed with honesty.

“Other attributes required: forgiving, opinionated, and not afraid to tell me when I’m wrong. Must also enjoy being touched and kissed at any time of my choosing.”

The fourth glowed with promise.

“Call or email ‘YOUR HEART, HIS SOUL’ if interested in applying.”

The final made my future unfold.

The advert was so similar to one I should never have applied for.
A twist of fate that brought two destined people back together.
A job I would take in a heartbeat if the employer could offer such terms.
But I wasn’t free.
Neither was Gil.
Therefore, my interview could never happen. 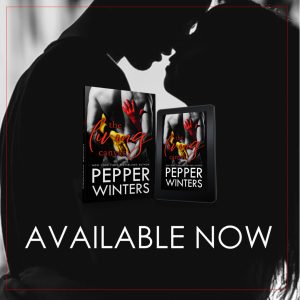 Uncertainty, indecision and heartache litter the plot of The Living Canvas. As we learned in the previous book, Gil has suffered through a life that consumed all of his choices. The path that lead Gil to the present is littered with those that sought to take advantage, humiliate and profit from this young man’s innocence. Determined to make his life something to be proud of, Gil throws himself into his passion.

The one constant from Gil’s past is Olin. After the two reconnect in quite the unique way, life begins to unravel. No one is safe from the heartache of this tragedy. Will Gil find a way to overcome the obstacles and have a life that he only dreamed of so long ago?

The Living Canvas is the conclusion to a heart stopping duet that is full of twist and turns. It is a journey about overcoming insurmountable obstacles and unbelievable secrets. Pepper Winters has created a world that is tragic for the main characters, but at the same time allows the reader to discover the depth of human devotion. It’s a path filled with agony, heartache, and second chances. Discover the secrets hidden within the pages of the Master of Trickery duet. 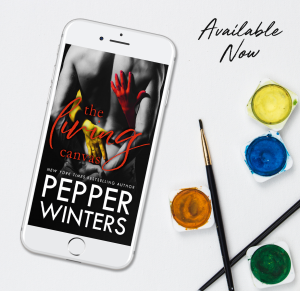 Tears beyond my control rained heavy and hard down my cheeks. I was allowed to hate him. I was meant to curse his very existence. I had no trust where he was concerned. No obligation in any form.

Yet, I cried for him and for me.

I cried for both of us because it wasn’t fake breakups, molesting teachers, or blackmailing murderers who’d broken us.

It’d been the lies.

The shadows that’d always surrounded Gilbert Clark and the ones he retreated to rather than staying in the light with me.

No matter what happened.

No matter if I died tonight, he died, we all died, this had died.

There is no more us.

His arms wrapped me in a cage, his love imprisoning me.

I tried to stop crying. To put aside my grief and wake up.

But slowly, stealthily, finality crept over me.

My eyelids no longer opened.

My brain no longer operated.

He clutched me closer as the final dregs of energy siphoned out of me. He stroked my hair and kissed my ear as I gave in to the cloud of unconsciousness. “Hopefully, by the time you wake up…this will all be over. You’ll be free. You’ll never have to see me again.” He angled my chin, his lips claiming mine.

I tried to pull back, to stop the kiss, to study his godforsaken eyes, but he caged me closer. He pulled heat and hunger from deep within, sending me into lullabies with his taste on my lips and his grief on my tongue. “I’m so sorry, O. So sorry for ever thinking I could make you happy. You deserve so much more. I love you. I love you with every fucking part of me, but I can’t stop this. At least sleep is a gift I can give you. The only thing I can give you.”

Voices were far away and not of my dream world as he lowered me down until I lay on the stage. My eyelids fluttered as he turned on the air compressor and the first lick of unwanted paint landed upon my skin.

But I couldn’t move.

Gil was an artist.

Art was his drug.

The creation of beauty helped him cope in the depths of his despair. He needed art to function, to survive.

And with his talent, he stole my function.

Brush by brush, he destroyed me.

Colour by colour, he sentenced me to die.

He snuffed out my survival.

He’d poisoned me so I’d sleep.

So I wouldn’t be awake when my purpose as his masterpiece was over. 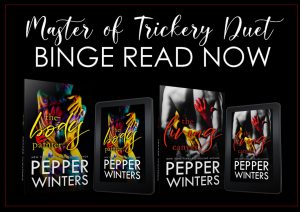