by Samantha Young
Also in this series: 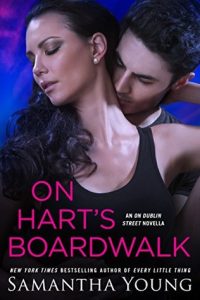 Nate and Liv have a great life together but they miss the spontaneity and freedom they enjoyed early on in their romance. Careers and their children have inevitably kept them busy, so when Nate discovers Liv is feeling disconnected from him, he plans an anniversary trip to the idyllic seaside town of Hartwell, Delaware. There he hopes they will have the opportunity they’ve been craving–a chance to reinvent themselves and fall in love all over again.

With each new day comes a new adventure, from wedding crashing at the five-star boardwalk hotel to pretending they are two strangers having a chance encounter at the boardwalk bar. In the midst of this daring, sexually-charged game of romantic rediscovery, Nate and Liv discover the only constant they need is each other. 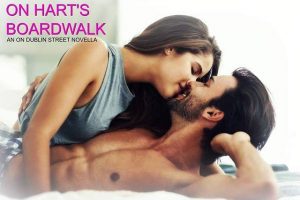 Living life as a married couple can be a dream come true. At other times, it seems to dissolve without notice. For Olivia and Nate – the past 10 years during their marriage passed in the blink of an eye. It was a time of happiness with each leaning on the other for support during difficult times. As with any family, life gets hectic, and somewhere along the way Olivia and Nate have forgotten to make time for one another.

With two daughters to keep them busy, Liv and Nate have begun to drift apart. Nate experienced a loss so profound that it has left him lacking in communication, attention, and affection. After overhearing Liv confiding in a friend that she is unsure where her marriage currently stand, Nate takes matters into his own hands to get their marriage back on track. With their future on the line, Nate takes his wife to Hart’s Boardwalk. A trip that can make or break their already fractured lives.

Get ready for a crossover novella from Samantha Young that will melt your heart. Fans of the On Dublin Street series will get the first glimpse of life for Liv and Nate after married life and children have graced their world. It’s a genuine look at what can easily happen to a marriage when communication, responsibilities, and distance can get in the way of wedded bliss. Live and Nate definitely are facing such a relatable topic, and it was a wonderful treat to have them grace the world in Hart’s Boardwalk.

While I love revisiting the world of Hart’s Boardwalk, Young wrote a wonderful romance between two characters that are very realistic and fascinating. A compliment to the author that has graced fans with this glimpse into one of the most ‘liked’ couples from the Dublin Street world. One thing is certain – regardless which series is your favorite, you will love every single moment of heartache and happiness that Live and Nate experience in this novella. 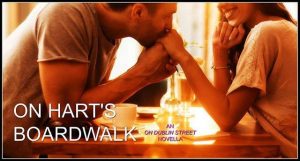 Although Nate had agreed to wait to have sex until we played out our little strangers in a bar fantasy, I could tell he was disgruntled. For some reason his irritation made me want to torment him even more. After we showered (separately) and dressed, I grabbed his hand when we walked down to breakfast, trailing the fingertips of my free hand over the skin on his forearm exposed by his T-shirt.

Walking down the stairs he frowned at me. “You’re doing that deliberately.”

“Are you saying I don’t get to touch you at all until tomorrow night?”

“No.” He suddenly stopped and pressed me up against the wall of the stairwell, his mouth inches from mine. His hand, the one not holding mine, slipped under my sundress, his fingertips caressing their way up my inner thigh.

“Nate,” I gasped, looking down the stairs to make sure the entrance was empty.

“You tease me, babe…” His hot breath whispered against my lips. “I tease you tenfold in return.”

I fought with the desire flooding me and the concern over disrespecting our very nice inn owner. My concern won out and I reached for his wrist under my dress and forcefully removed his hand with a flash of ire in my eyes that made him smirk in triumph. “Not here.”

“Just playing your game.” He stood back and then began leading me down the stairs like nothing had happened.

There was only one other couple in the dining hall that early in the morning, an older couple who smiled warmly at us and greeted us ‘hello’ as we grabbed some coffee from the buffet area.

We’d just taken a seat at a table when Aydan came out of the kitchen and beamed at us. “You two are up early. Jetlag?”

“Yeah,” I said, fighting off a yawn. “I’m still kind of feeling it actually. But this will help.” I raised my coffee cup.

“So will some food.” She handed us each a menu. “I’ll be back in a minute to take your order.”

We were looking over the small menu and I was trying to decide between scrambled eggs, potatoes, and bacon; pancakes, maple syrup and bacon; or waffles. “I forgot how good breakfast is here.” I glanced over at my husband, who seemed less excited than me about breakfast. “You’re getting the egg white frittata, aren’t you?”

Nate used to indulge more food-wise but he’d found, as we all found, that he couldn’t metabolize crappy food as well as he used to. So, he only indulged every now and then.

“Aye.” He nodded, his eyes twinkling with amusement. He knew it bugged me that he had more willpower than I did.

“I’m getting the waffles,” I immediately decided.

Nate laughed and leaned over to caress the top of my ass, which thankfully was hidden by the back of my chair from anyone else’s few. “You eat whatever you want, babe. We’ll both enjoy the fruits of that labor.”

I should have glared at him for feeling me up in the breakfast room of this quaint inn, but I couldn’t, because it felt like I had my old Nate back. The guy who made me feel sexy and wanted no matter what. So instead I gave him a soft smile.

For some reason my reaction made his gaze turn liquid with heat and he impulsively leaned over, cupped my face in his hand and kissed me. Hard. Deep. Quick.

When he let me go I couldn’t even think long enough to be embarrassed that he’d just Frenched me in front of an elderly couple who were trying to eat their breakfast. I could only blink, dazed, my lips wet and waiting for more. “What was that for?”

“Because I love you.” He shrugged, like it was most obvious answer in the world.

Before I could say anything else the sound of Bailey Hartwell’s raised voice met our ears from somewhere near reception. “It’s ridiculous that’s why!”

Nate and I shot each other amused looks, and pretended to peruse the menu even though I knew were both listening in. Nosy buggers.

Her voice was lower now, and the fact that we hadn’t heard another voice reply suggested

she was on the phone. “Vaughn, we have a house,” she hissed. “We don’t need another… why would you sell it? It’s beautiful… we don’t need to buy a house together to be together… it’s a waste of money…” there was a longer stretch of silence. “Okay, if you’re that intent on wasting money why don’t we just strip the house out and make it the way we both want it… it sits right on the water…. Stop being romantic when I’m trying to be practical, you know it confuses me… Stop it, I’m at the inn.” Her voice dropped even lower. Her breath seemed to catch. “You’re going to pay for that, Tremaine… no… no… Vaughn… okay, fine…. I love you too, you, handsome bastard.”

That seemed to be the end of the conversation, and I turned to Nate, laughter bubbling in my throat. “That sounded familiar.”

“I don’t think our inn owner is going to Scotland anytime soon.” 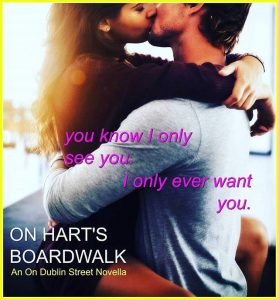 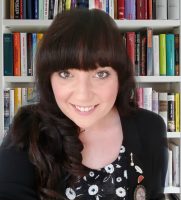 Samantha Young is the New York Times,  USA Today  and Wall Street Journal bestselling author of adult contemporary romances, including the On Dublin Street series and Hero, as well as the New Adult duology Into the Deep and Out of the Shallows.  Every Little Thing, the second book in her new Hart’s Boardwalk series, was published by Berkley in March 2017. Before turning to contemporary fiction, she wrote several young adult paranormal and fantasy series, including the amazon bestselling Tale of Lunarmorte trilogy. Samantha’s debut YA contemporary novel The Impossible Vastness of Us was published by Harlequin TEEN in ebook & hardback in June 2017.