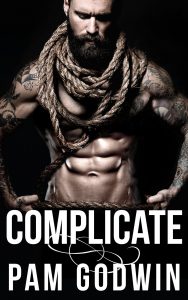 The heart-pounding conclusion of the DELIVER series.

Cole Hartman is a mystery.
He works alone, sleeps alone, and satisfies his aches…alone. He hasn’t touched a woman in seven years.
No one will ever compare to the one who broke his heart.
Until he stares into the seductive eyes of his enemy.

He finally meets his match in the redheaded Russian spy.
But she’s a dangerous risk. His obsession with her leaves him only one choice.

If you love something, let it go.
If it doesn’t kill you, hunt it down and take it.

This is Cole Hartman’s story.
But it’s not his beginning.
The saga of Cole, Danni, and Trace starts in the TANGLED LIES trilogy.

You don’t have to read TANGLED LIES, but if you want to read it, do so before reading this book. 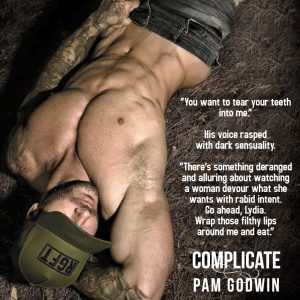 Cole Hartman’s time was up. The past has finally come knocking and will not be ignored. All of the choices that led up to this moment were for naught if Cole’s secrets come to light. Lydia has rolled into Cole’s existence like a hurricane. With an agenda at hand, Lydia is determined to unlock Cole’s secrets at any cost. What neither could have predicted was the torture and torment would lead to an attraction so intense, neither would recover.

The last journey in this saga unfolds through the pages of Complicate….the last book in the Deliver series by Pam Godwin. Fans of Godwin’s writing have been waiting for Cole to have a chance at happiness since the Tangled Lies series. Now fate has intervened, and Lydia is the firestorm that can only be tamed by Cole.

I have wondered what path the future would take for Cole. As the series came to an end, I was hesitant that Cole would have the ending that readers were longing for. Then Lydia came along and worked her way into the fold. The attraction for the two was explosive and full of twists and turns. I loved the way the last third of the book kept you wondering where the journey for Cole and Lydia would end. This was definitely the perfect story for the last book of the series!! 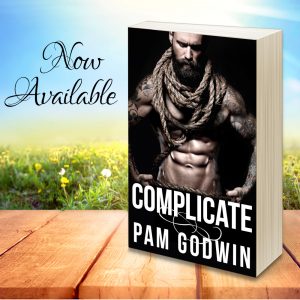 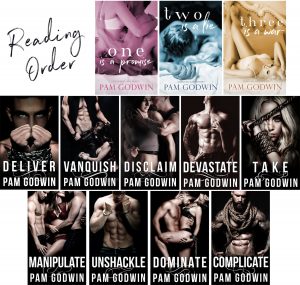