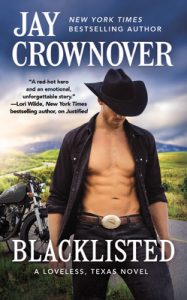 Dr. Presley Baskin has always lived a quiet, calm life. Unfortunately, nothing about her life in Loveless, Texas—especially not the wild, rowdy, and impossibly close-knit Lawton family who’ve claimed her—is quiet or calm. Which is how loner Presley finds herself roped into patching up local bad boy Shot Caldwell against her better judgment. Presley wants nothing to do with the dangerous, brooding leader of the local outlaw motorcycle club. But when someone starts stalking her, Shot is the only person she trusts to help. Plus he owes her one…

Palmer ‘Shot’ Caldwell has always known his life isn’t made for relationships. At least until shy, secretive, Presley reluctantly pulled a bullet out of him. He’s oddly protective of the pretty doctor, so when she comes to him for help, hard-hearted Shot suddenly realizes there’s nothing he wouldn’t do to keep her safe. 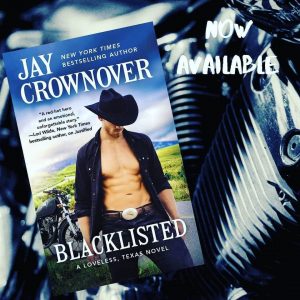 Life for Dr. Presley Basking has literally been turned upside down. After finding out who her father was, Presley ‘inherited’ three half-siblings in Loveless, Texas. Uncertain where her place was with her newly found family – Presley found herself reluctant to get too close. After all – there’s someone from Presley’s past that is determined to harm those that Presley holds near to her heart.

When Chaos erupts for the Sons of Sorrow, Presley finds herself saving the life of the club President. Shot Caldwell is anything but ordinary. The rugged and prickly biker has a way of attracting attention, and Presley is not immune to his charm. With Shot living on the edge of lawless behavior, he knows that the doctor is at risk for working her medical magic. Determined to repay the debt, Shot finds himself watching out for the woman that has captured his attention in the most unexpected ways.

Blacklisted is the latest release in the Loveless, Texas series by author Jay Crownover. What should I tell you first? Shot has literally stolen the show for me!! The rugged and private biker stepped into Presley’s life like a whirlwind. Two characters that couldn’t be any more opposite if they tried. Everything about this story kept me engaged and glued to my reader. I would love for Jay to write a series centered around the Sons of Sorrow club!! Get ready for a ride that will leave you waiting for one more trip to Loveless, Texas!!