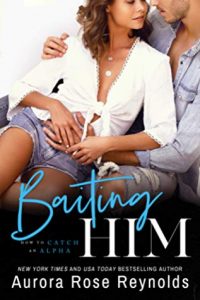 From New York Times bestselling author Aurora Rose Reynolds comes the second book in the steamy, witty, and hilarious How to Catch an Alpha series.

Chrissie doesn’t have time for guys, hot or otherwise; most days, she barely has time to sleep. With a thriving bakery that demands her attention and plenty of proof that relationships aren’t worth the trouble, she’s content to go it alone. Too bad she’s unwittingly baited Mr. Tall, Dark, and Way Too Gorgeous—and he’s just waiting for a chance to bite.

Gaston is used to getting what he wants, but he also knows nothing good ever comes easy. From the moment he meets Chrissie, he realizes that this woman who makes him laugh, smells like cupcakes, and looks like a tasty snack is going to be his greatest challenge. And if he’s lucky, she’ll be his biggest reward.

But someone else wants to catch Gaston at all costs—even if it means endangering the lives of the people he loves. Somehow Gaston must thwart danger and convince Chrissie that he’s the perfect catch. 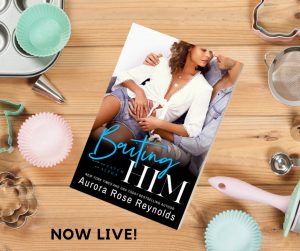 Baking has consumed Chrissie’s life from morning to sunset. With the dream of owning a bakery a current reality, Chrissie has little time for anything else. With friends that are determined to pry Chrissie away for a night of fun, a bachelorette party is the focus for the night. While saddled up to the bar, Chrissie crosses paths with a sexy hunk that deserves far more than a second glance.

Imagine the surprise that Chrissie feels once she learns that the hunk she was flirting with owned the nightclub. Gaston is determined to make the interaction with Chrissie count. With a jilted heart, Chrissie can’t believe that any guy that stands out like Gaston would be interested in someone like her. There is an undeniable chemistry that sparks when Gaston and Chrissie interact. Where will it lead? Only time will tell if this night on the town turns into something more.

Have you had the pleasure of reading a book by Aurora Rose Reynolds? I have to admit that this is the FIRST book by the author, and I am hooked!! Gaston and Chrissie are quite the matchup! This duo exudes charm, witty banter, and an adorable connection of the heart. Baiting Him was a charming read that left me wanting to dive into more from this author!!

NEW YORK TIMES, USA TODAY & WALL STREET JOURNAL BEST SELLING AUTHOR Aurora Rose Reynolds was also featured in a one on one interview for the Cosmopolitan online magazine. Aurora is a navy brat who’s husband served in the United States Navy. She has lived all over the country but now resides in Tennessee with her Husband. She’s married to an alpha male that loves her as much as the men in her books love their women. He gives her over the top inspiration everyday. In her free time she reads, writes and enjoys going to the movies with her husband. She also enjoys taking mini weekend vacations to nowhere, or spends time at home with friends and family. Last but not least she appreciates everyday and admires it’s beauty.