by Kit Rocha
Also by this author: Beyond Jealousy, , 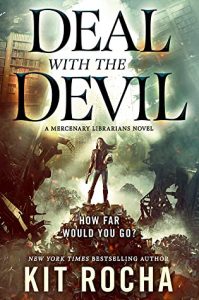 The United States went belly up 45 years ago when our power grid was wiped out. Too few live in well-protected isolation while the rest of us scrape by on the margins. The only thing that matters is survival. By any means. At any cost.

Nina is an information broker with a mission: to bring hope to the darkest corners of Atlanta. She and her team of mercenary librarians use their knowledge to help those in need. But altruism doesn’t pay the bills—raiding vaults and collecting sensitive data is where the real money is.

Knox is a bitter, battle-weary supersoldier who leads the Silver Devils, an elite strike squad that chose to go AWOL rather than slaughter innocents. Before the Devils leave town for good, they need a biochem hacker to stabilize the experimental implants that grant their superhuman abilities.

The problem? Their hacker’s been kidnapped. And the ransom for her return is Nina. Knox has the perfect bait for a perfect trap: a lost Library of Congress server. The data could set Nina and her team up for years…

If they live that long.

As a long time fan of Kit Rocha, I couldn’t wait to get my hands on the long awaited new series Mercenary Librarians. If you are a fan of the authors, then you know how captivating their dystopian Beyond and Riders series can be. Strap on your tool belts and get ready for a glimpse into the lives of librarians of the future.

Deal with the Devil is centered around a group of female mercenaries that are making their way through the hardships in order to give others a chance to have a few comforts in this tattered and destructive world. Nina comes barreling into the series with a force that will captivate you from the very first chapter. With a past that is shrouded in secret, Nina has found a couple of allies that serve as the family that she desperately needs.

When a band of genetically modified soldiers seek out Nina for a job, life will take on an adventure all its own. Knox is the leader of this band of super soldiers, and he is on a mission that will alter the lives of each of the members in this strange band of travelers. Determined to complete a mission that will have dire consequences, Knox can’t help but find himself attracted to the woman that gives so much to others. With a quest for survival in the backdrop, this trip will reveal more than any of these soldiers could imagine in a world that is crumbling by the minute.

Deal with the Devil is an interesting glimpse into a post-apocalyptic world that will tease your book-lovers heart. With life crumbling around them, Knox and Nina will lead those close to them on a journey that will have consequences that will change all their lives. While the world in Deal with the Devil is interesting, I am still a hard core Beyond Series fan!! The only thing that bothered me were these reports from the lab that would show up between chapters. They don’t list which soldier the report is referencing per say, and I found them extremely distracting in my reading. These lab reports didn’t add to the plot, so they were a distraction I could do without.

All in all – fans of dystopian novels will find a unique glimpse into the world after so much destruction. This novel is lengthy, and I found myself ‘quick reading’ more than absorbing certain parts of the book. With a title like Deal with the Devil paired with my previous experience with Kit Rocha books, I really expected so much more from this novel. After such a HUGE novel, readers will still be struggling to uncover more about the solar flares and the decline of the people left in this world. Without giving more of the plot away, I will also add that there is less ‘librarian’ content and more super soldier. There are several things that transpire that make me question why the plot points were there.

With all that information – I am going to have to say this book is a ‘middle of the road’ read for me. Does it mean I will give up on the series? I don’t think so given the previous books I have read in the Kit Rocha backlist. I am definitely curious as to where this series will lead. Hopefully – the world building will only get better as the series goes on. 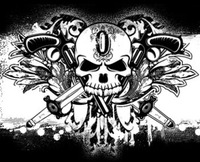 Kit Rocha is actually two people—Bree & Donna, best friends who are living the dream. They get paid to work in their pajamas, talk on the phone, and write down all the stories they used to make up in their heads.