It’s the MOVIE TRAILER everyone has been waiting for.

Cole, Summer, and Cocky are alive and featured in the Movie Trailer for HOLLYWOOD DIRT!!

Hollywood Dirt is based on the book by the New York Times Bestselling Author Alessandra Torre.

Streaming will be LIVE this fall, and will be provided through PassionFlix.

To see Hollywood Dirt and many more of your favorite books brought to life on a device near you, make sure you SIGN UP at PassionFlix !!

Hollywood is coming to town!!

If you haven’t dived into the pages of Hollywood Dirt then you are missing out!

Read the book prior to the movie release. 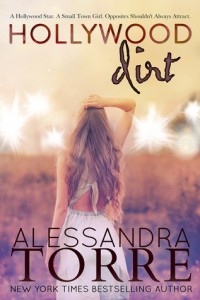 Summer Jenkins. That’s me, a small town girl stuck in Quincy, Georgia. I cook some mean chicken and dumplins, can bluff a grown man out of his savings in poker, and was voted Most Friendly my senior year.

We were from different worlds. Our lives shouldn’t have collided. But then Cole Masten read a book about my small town. And six months later, his jet landed on our dusty airstrip, and he brought Hollywood with him.

From the start, I knew he was trouble. For our town. And for me.