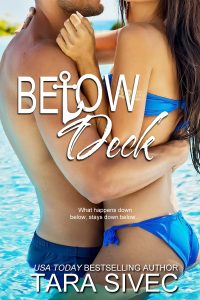 Declan McGillis can’t stand rich people. But working as a deckhand on a luxury charter yacht, he also can’t escape them. Declan has spent years kissing their ass and doing their bidding…whatever it takes to make his dreams come true, and nothing will get in his way of being the captain of his own yacht one day.

Mackenzie Armstrong knows what people think when they look at her. She knows from the outside looking in, it seems like her family has it all and doesn’t have a care in the world. Things aren’t always what they seem, and not only does Mackenzie have the weight of her family’s struggles on her shoulders, she also needs to prove to Declan that she’s not the spoiled princess he believes her to be.

Declan can’t ignore the sparks of lust between them, even though Mackenzie is completely off limits and absolutely out of his league.

Mackenzie thinks a vacation fling is just what she needs to forget about the mess her life has become, and Declan is the perfect man for the job.

Will this be a quick romp in the water, or will it turn into something more when Mackenzie finally gets below Deck? 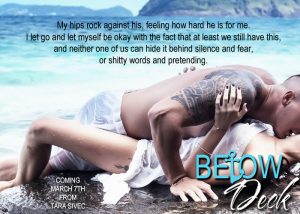 I can’t return her smile, I can’t say a word, all I can do is charge her like an animal, my hands clenched into fists at my sides and my dick so painfully hard in my shorts all I can think about is getting some fucking relief.

She opens her mouth when I’m a foot away.

I close the distance in record time, grab her face with my hands, bend my knees, dip my head and claim those full, gorgeous pink lips. Her mouth immediately opens for me, gasping, and I take the opportunity to dart my tongue inside. As soon as it touches hers, a shock of need shoots right through my body. I try to control myself, but when the shock leaves her and she immediately swirls her tongue around mine, kissing me back and moaning into my mouth, I’m done for.

My hands drop from her face and I wrap my arms around her waist, yanking her roughly against my body as we both battle to deepen the kiss. Our tongues push and pull against each other, our heads tilt from side to side to get the best angle, and before I know it, I’m turning her around and pushing her roughly into the wall of the ship.

Her hands fist into my hair and clench tightly as I bend my knees and push myself between her thighs. She moans into my mouth again when I push up, and slide my aching cock against her as she lifts one leg and hooks it around the back of mine, pulling me tightly to her. I kiss her harder, deeper, with more urgency than I’ve ever felt with any other woman. My hips thrust against her in the same rhythm as my tongue pushing in and out of her mouth, and I feel like a fucking fifteen-year-old who could come in his pants at any second.

The heat between her thighs as she moves her own hips and rubs herself against me makes me want to pull my head back and roar. I take a second to run my tongue over her full bottom lip before diving back into her warm, wet mouth and claiming it. She sucks my tongue deeper into her mouth, and now it’s my turn to groan with need, wanting more…wanting everything from this woman. She smells like coconuts from the suntan lotion she put on earlier; she tastes like the sweet wine she drank at dinner…

The dinner my crew served her. The dinner where I was the bartender and she was the guest. The Goddamn guest that I shouldn’t be mauling against the side of the fucking ship.

With every ounce of willpower I possess, I yank my mouth away from hers and take a stumbling step back from her body. Her leg drops from around mine and her hands drop from their hold on my hair. I continue moving backwards until I smack into the deck railing, my eyes never leaving her as I watch the flushed skin of her chest rise and fall with rapid breaths. With the moonlight still shining high above us, I no longer have to wonder how her lips would look if I kissed her. I silently watch her bring one of her hands up and trail the tips of her fingers over her red, swollen lips as she stares back at me in shocked wonderment.

I want to move back to her and finish what I started. Take whatever she wants to give me, reach up under her skirt, yank her panties to the side, and slam myself inside of her to ease the ache in my cock, but I can’t. I shouldn’t have come out here. I shouldn’t have kissed her, and I sure as hell can’t fuck her. 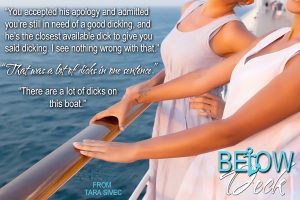 Carrying the weight of the world on your shoulders is never an easy task. For Mackenzie – the insurmountable worry she feels about the steady demise of her father’s fortune plagues her every thought. A new marriage to a much younger woman has resulted in a fleecing of their company funds. Mackenzie is determined to find a way to prove it was her step-monster that is siphoning funds. Until then, Mackenzie is stuck entertaining her father by taking a family vacation.

Determined to keep her head above water, Mackenzie brings her best friend Brooke along on the trip. This extravagant trip about a yacht is the last thing the family needs financially, but Mackenzie’s father is determined to give his new bride her hearts desire. Brooke convinces Mackenzie that her father’s lack of attention to his business (and money) shouldn’t fall upon her shoulders. Brooke is determined to get Mackenzie to let loose and enjoy the sun during the trip. After climbing aboard the luxury yacht, Brooke nudges Mackenzie to enjoy the ‘sights’ that this trip offers…..mainly in the form of a certain crew member named Declan!!

Mackenzie can’t believe how one person can set of such a range of fireworks from the moment their eye connect. For Declan – Mackenzie is the one temptation he has encountered in his quest to become a ship captain. For years – Declan has set his sights on working his way through the ranks on the crew of the Helio. A task that keeps him away at sea for long stretches of time. Now he is close to taking his test to become a captain. However, all of that fades from his mind when he sets his sights on Mackenzie.

These two are fighting an attraction so deep neither can ignore it. Brooke pushing Mackenzie to explore a temporary fling while on this luxury trip. Declan is fighting within himself the consequences of acting on his feelings. First impressions leading him to believe that Mackenzie is a pampered princess that couldn’t know how the real world ‘works’. No matter the misgivings, these two embark upon a ‘no strings attached’ romance during their time at sea. What neither could predict is just how deep their feelings would run after spending their time together. Does the docking of the ship signal the end of a really great cruise? Only time will tell if this romance was destined for the rocky seas.

What a rocky journey Mackenzie and Declan embark upon. A ten day cruise filled with stolen moments, passion, miscommunication, and some really hot sex!!! While some of Declan’s actions and statements to Mackenzie will leave you ready to choke him, its his struggle to act upon his feelings that really had me by the balls. (well…I don’t really have balls, but you get the picture). I loved the romance that blossomed between the two characters, the romantic excursions at sea, and the ease that they felt in one another’s arms.

The secondary characters add a great layer of sarcasm and wit to Declan and Mackenzie’s life. It was great to see how Brooke’s life ending with the closing of the book as well. Below Deck is a great fast paced read with plenty of sarcasm, wit, and romance! Make sure you pick up your copy today!! You can thank me later!! 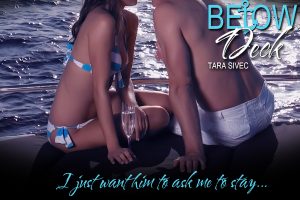 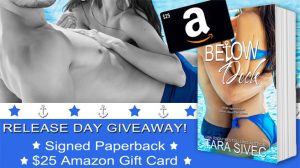 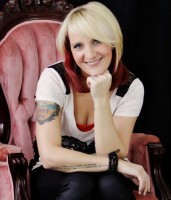 Tara Sivec is a USA Today best-selling author, wife, mother, chauffeur, maid, short-order cook, baby-sitter, and sarcasm expert. She lives in Ohio with her husband and two children and looks forward to the day when they all three of them become adults and move out.

After working in the brokerage business for fourteen years, Tara decided to pick up a pen and write instead of shoving it in her eye out of boredom. She is the author of the Playing with Fire series and the Chocolate Lovers series. Her novel Seduction and Snacks won first place in the Indie Romance Convention Reader’s Choice Awards 2013 for Best Indie First Book.

In her spare time, Tara loves to dream about all of the baking she’ll do and naps she’ll take when she ever gets spare time.

Tara also writes under the pen name T.E. Sivec. Check out the page for T.E. Sivec for more information.