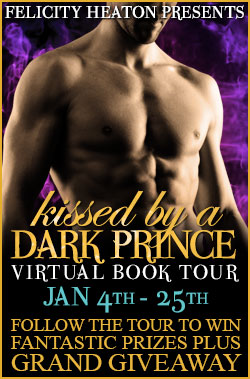 Step into the dark, magical and passionate world of the Eternal Mates series

It’s great to be here at Little Read Riding Hood today as part of the Kissed by a Dark Prince Book Tour celebrating the release of the first book in my new Eternal Mates series of paranormal romance novels.

Today, I’m going to be introducing you all to the world of the Eternal Mates series.

But before we get to the main event, I want to introduce myself. I’m a British paranormal romance author and a USA Today best-seller. I have been writing since 2005, and went indie in 2006. I love to write big worlds, populated by vampires, shifters, demons, fae and angels, and I have several series. This tour is about the Eternal Mates series, which is actually a spin-off from my Vampire Erotic Theatre series. That series focused on a family of vampires at one theatre in London but it had glimpses into the wider world outside the theatre. It’s that world of fae, dark elves, demons, witches, shifters, and other incredible species that the Eternal Mates focuses on.

Now, on with the show…

I came up with the idea for the Eternal Mates series then. Originally, I had intended to write it as a project I could approach NY publishers with, but as I delved deeper into this magical and fantastical world, I couldn’t bring myself to hand it over to someone else. I didn’t want to see this world I was creating pulled apart and put back together to fit their image of how it should be.

The Eternal Mates series is about the broader world outside of Vampirerotique, the London theatre at the heart of its sibling series, and it features a new species that are in many respects the central focus of the series.

I have always loved the notion of elves. Not the cute, green-and-red-wearing helpers we think of at this time of year, but the tall and beautiful, and magical kind. I have never come across one in a paranormal romance and I never thought about that until I decided to write this series.

My elves are dark. They’re beautifully dark and deadly, and vicious. They have psychic powers and can teleport, and wear extremely sensual and sexy black skin-tight armour they control with their minds. Not only that, but they’re immortal, have pointy ears and wicked purple eyes, and a penchant for drinking blood.

That blood part sound familiar? That’s because in this world, elves are actually the forefathers of vampires. Vampires are the result of elves becoming tainted by the war and darkness in the mortal world. The vampires stemmed from corrupted elves and have lost much of that species abilities—such as walking in daylight, and all their psychic gifts.

Seeing this corruption spreading through the elves, their prince, Loren, who is the hero of Kissed by a Dark Prince, withdrew his people to a new realm in Hell, leaving the mortal world to the tainted elves who then spawned vampire children.

Yes, in this series, there are many realms. The main settings for the books are Hell and our mortal world, but there is also a place thought of as Heaven. The realm of the elves in Hell isn’t how you would picture that dark place either. It’s a beautiful, verdant paradise-like kingdom in the middle of endless darkness, surrounded by other kingdoms, including the seven grim ones ruled by the powerful demon kings who are often at war with each other.

Demons and elves aren’t the only species living in Hell either. There is the Devil and his loyal demons too, and gods and goddesses, dark witches and fallen angels, and shifters among others. Dragons have a home in that dark realm, and bears and vampires make a good living as mercenaries in the demon wars.

In our mortal world, there exists a demon-hunting organisation attempting to keep the peace between non-humans and humans, and keeping the existence of those preternatural creatures off our radars too. Archangel.

Archangel polices our world, studying demons and fae, and cataloguing them, and dealing with any who endanger humans. They visit the underground fae towns where witches peddle their spells and phantoms look for their next lover/victim, and succubi run bordellos where only the strongest non-humans are guaranteed to walk away with at least their lives.

So as you can see, the world of the Eternal Mates series is vast and filled with adventures just waiting to happen, whether they are the results of a dark elf prince clashing with Archangel, or a demon war in Hell, or a trip to a local fae town that leads to a pursuit across continents.

It’s a series packed with hot-blooded and hot-headed heroes on the hunt for their fated ones, and sassy and strong heroines who will set them straight and steal their hearts. It’s alpha hero meets alpha heroine, often with explosive and passion-packed results.

So why not step into the dark, magical and passionate world of the Eternal Mates series?

Be sure to follow this fantastic tour to learn more about the passionate heroes and sassy heroines in the Eternal Mates romance series! You can also find yourself in with a chance to WIN a $50 or $25 Amazon Gift Certificate if you follow the tour. More details, including how to enter and a full list of stops, are available at the Kissed by a Dark Prince Virtual Book Tour page.

Kissed by a Dark Prince is available from Amazon Kindle, Kobo Books, Barnes and Noble Nook, Apple iBooks stores and other retailers. Also available in paperback. Find the links to your preferred retailer and a downloadable 6 chapter excerpt at: http://www.felicityheaton.co.uk/kbadp 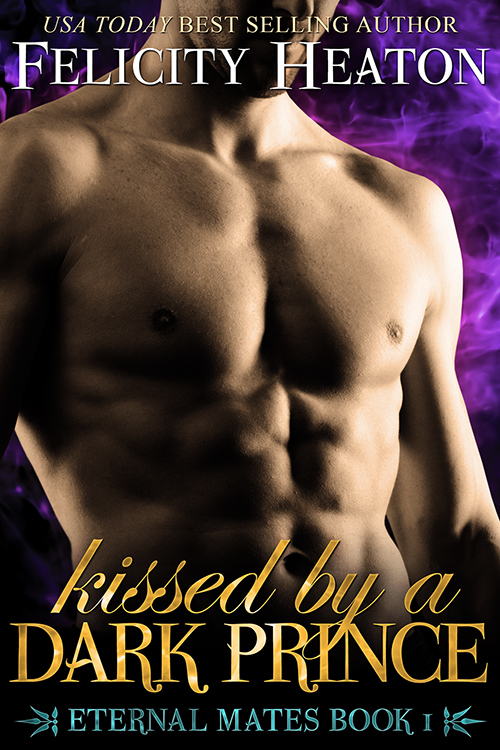 Kissed by a Dark Prince (Eternal Mates Romance Series Book 1)
Felicity Heaton
Olivia thinks it’s her lucky night when a dangerously handsome unconscious fae ends up on her inspection table. He’s her chance to redeem herself with her employer, the demon-hunting organisation, Archangel. But when the tall, dark and deadly immortal warrior awakes, she gets much more than she bargained for…

Attacked by his enemy in the elf kingdom, the last thing Prince Loren expects when he comes around is a beautiful angel watching over him and medical technology of the mortal realm. Hazy from his injuries, all he can focus on is the pulse ticking in her throat and the sweet allure of her blood.

One single bite reveals she is his eternal mate, triggering a bond between them that will leave him weakened until it is completed… or broken, and pulling Olivia into the crossfire of his ancient feud.

To protect his people and his mate from the machinations of a madman, Loren must risk everything by working with Olivia at Archangel to find a way to break the bond blossoming between them.

But will Loren be strong enough to place duty before desire and give up the one thing he has waited millennia for and craves above all others—his eternal mate? And will Olivia be able to resist the incredible heat that burns between them and the temptation of her dark prince’s kiss?

If you’re a fan of paranormal romance authors Lara Adrian, J R Ward, Sherrilyn Kenyon, Gena Showalter and Christine Feehan then you will enjoy her books too.

If you want to know more about Felicity, or want to get in touch, you can find her at the following places: