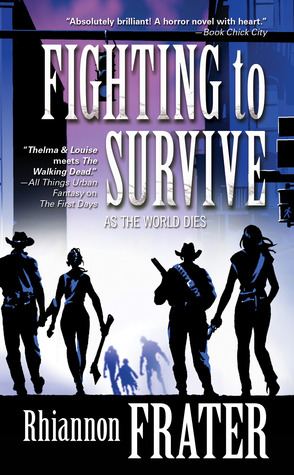 It’s time to clear the hotel.

The fort has grown crowded as survivors of the zombie apocalypse have found safety between its walls.  Winter is coming; soon it will be too cold to live in tents and other makeshift shelters.  The leaders of the survivors—Katie, Jenni, Juan, Travis, and Nerit—decide it’s time for an assault on the zombie-occupied hotel that looms over the town square.

A pitched battle in the banquet room is the start of a harrowing, room-by-room struggle from Reception to roof.  As the sun sets, the people of Ashley Oaks gather in the hotel’s rooftop ballroom and gazebo to celebrate their survival.  Gazing out over the beauty of the surrounding Texas countryside, it’s hard to believe that death and danger lurk around every corner.

The fort’s search and rescue teams have attracted unwanted attention from bandits who see the fort as competition for food . . . and as a ready source of women.  The first attacks are minor, but everyone knows there is worse to come.

And beyond the fort’s walls, the zombies shamble, moaning, eyes fastened hungrily upon the living.

And now, some thoughts from the author …

Women, Society and the Zombocalypse

I honestly didn’t set out to write a feminist take on the zombocalypse when I started writing AS THE WORLD DIES as an online serial. I just wrote about the sort of people I that exist in my everyday life.  The characters all evolved naturally as I wrote, as did their complicated relationships and sometimes disastrous choices.  It was only later that I fully began to understand how ground-breaking having two female leads in the genre actually was.

Admittedly, Jenni and Katie were born out of my desire to read a zombie story that was from a woman’s perspective. AS THE WORLD DIES was born as online serial in 2005. At that time zombie fiction was inundated with the lone gunman wandering across the zombie-infested lands. Women, children, and men who weren’t Rambo in disguise were merely zombie fodder.  The women played the roles of the love interest (who often died), the victims, and the zombies.  It became demoralizing to read over and over again stereotypes that bore no real resemblance to any of the women in my life.  So when the characters of Jenni and Katie invaded my mind one day at work, I wanted to write their story and share it with others.

When I started the serial, I wanted to write about real men and women with flaws and strengths struggling to rebuild society in the zombie wastelands.  If history has shown us one thing, it’s that humans survive in communities. I didn’t want to create a world of alpha males and subservient women, or vice versa.  I wanted to write about real people dealing with real life issues while facing the undead hordes. I didn’t want to shy away from the difficulties of creating a new community. Differences of opinion, religion, culture, etc. were definitely going to cause problems at some point. Little did I realize that the issues my characters tackled in the online serial (which ran from 2005-2007) would become hotbed issues in 2012.  Religion, gay rights, and gender equality are all topics the people in the fort are forced to deal with while still dealing with bandits and zombies.

Oddly enough, I never thought about any of the females in my story as being “strong” or unusual. The positive feedback to the characters was definitely a reaction to all the stereotypical women in these kinds of books. People were genuinely surprised to read such positive portrayals. The readers weren’t surprised that the women were strong and competent; they were surprised to see an accurate portrayal of themselves, their wives, their girlfriends, mothers, and sisters. Quite a few male friends have told me that they loved how certain female characters reminded them strongly of the women they love.  Female fans have also shared how refreshing it was to see women doing the types of things they would do in the zombocalypse—like killing zombies.

Jenni and Katie aren’t wonder women or superhuman like Alice in the Resident Evil films. They aren’t perfect either. Each has to deal with the aftermath of the destruction of their lives and they don’t always make the right choices.  But they aren’t afraid to fight for their own lives and those they love. They step up and take part in the planning of the new community and fight for the survival of everyone.

There are, of course, men that don’t like the women playing such a strong role. One of them, Shane, becomes a dangerous foe to Katie when she has to kill his brother after he becomes infected.  It’s in Shane and his cohort that we see a more dismissive attitude toward women and other people in general.  Shane and Phillip are great at entering the zombie-infested towns and salvaging for supplies and serve the community well, but their attitudes toward women, especially bisexual Katie, creates serious problems for the burgeoning society in FIGHTING TO SURVIVE.  Shane and Phillip challenge the rules of the new society with their behavior. One particularly upsetting scene between Shane and Katie immediately causes a rift among the people in the fort as people take sides in a “he said, she said” battle.

One of the things that’s often missing in fiction, especially post-apocalyptic fiction, is the strong friendship bonds that exist among people.  Often the survivors are not really friends, but people thrown together that just barely get along.  In AS THE WORLD DIES, I enjoyed portraying various types of friendship bonds. There are best buddies, Juan and Travis, BFFs Ken and Lenore, and Jenni and Katie’s strong, sisterly friendship.

Though people comment on all three friendships as being refreshing and similar to ones they share in their real lives, the one that stands out the most is the friendship between Jenni and Katie. Women are not often portrayed as being friends in fiction. In fact, a lot of heroines are often the only women in the book.  Jenni and Katie’s friendship was one of the things my editor at Tor really enjoyed. It’s so rare to see female best friends who love and support each other. Usually women are portrayed as rivals. Since I have close female friends in my life it felt only natural to have Jenni and Katie be close.

In closing…I am very happy that readers embrace the characters and feel they are an honest, realistic version of people they have in their own lives.  I am also pleased that readers have enjoyed the dynamics of the new and growing society in the middle of the zombocalypse.

Rhiannon Frater is the award-winning author of the As the World Dies trilogy (The First Days, Fighting to Survive, Siege,) and the author of three other books: the vampire novels Pretty When She Dies and The Tale of the Vampire Bride and the young-adult zombie novel The Living Dead Boy and the Zombie Hunters. Inspired to independently produce her work from the urging of her fans, she published The First Days in late 2008 and quickly gathered a cult following. She won the Dead Letter Award back-to-back for both The First Days and Fighting to Survive, the former of which the Harrisburg Book Examiner called ‘one of the best zombie books of the decade.’ Rhiannon is currently represented by Hannah Gordon of the Foundry + Literary Media agency. You may contact her by sending an email to rhiannonfrater@gmail.com.