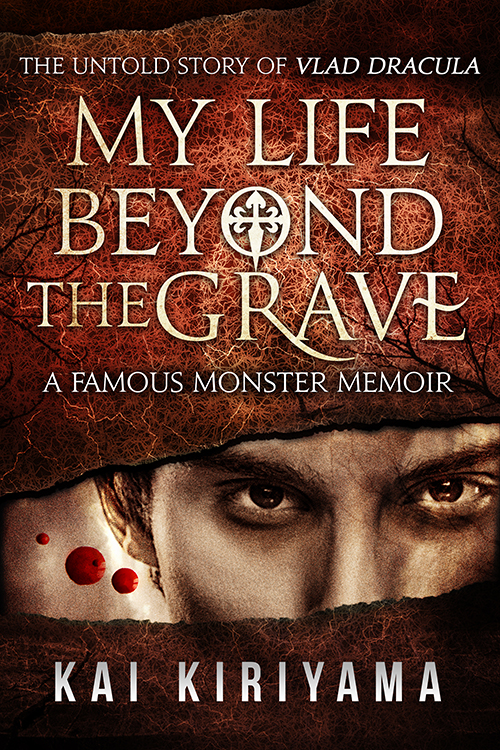 “I have lived a life worth speaking about, and have seen things that would leave a modern man weeping in fear. I have outlived my entire family and have lived to see a time that one could not think possible. I have traveled the globe, and I have spread an empire greater than anything that I could have ever accomplished in my mortal life.

I am here to speak of these accomplishments, to tell my story for once without the smoke and mirrors of the silver screen, or the whispers in the dark of a pub where it’s better that you pretend you don’t notice the regal, pale man in the corner who hasn’t touched his drink. I don’t expect you to believe everything that I say here in these pages, but this is my truth as I know it to be.

My name is Vlad Tepes Dracul, and I am here to tell you my story.”

Buy for Kindle on Amazon

As with all men, even I had to die.

According to the history books, and yes, I am narcissistic enough that I went back and checked the facts to see what people have been led to believe about me, I was killed in a skirmish somewhere that no one is quite certain of, and that the exact date of my death is up for debate.

They also say that the men who killed me took my head back to Constantinople. Obviously that is a damn lie. Immortal though I am, removing my head will kill me permanently. That was one of the first things that I was taught when I awoke as a vampire for the first time. Furthermore, I didn’t die by the road in a skirmish when they say that I did. There’s a reason that the history books have no accurate date for my death. Did you ever think to question why?

The scholars believe in part that it was to keep morale up, that the men fighting with me during my short third reign didn’t want to admit that I was dead, and that they fought hard to keep my death a secret, and to keep my remains from being taken to Constantinople.

That was not true. Well, it was partly true, but my head was not removed from my body.

The person who was killed and thought to be me was one of my doubles. I had hired three men to pretend to be me. They were given explicit instructions and were made up to resemble me ever more closely than they already did.

My wife was not aware of this fact, however, and I made sure that she believed me to be dead when the reports reached her ears. As soon as that part of the ruse was completed, I never saw my wife again.

It pains me to this day that I was never able to live a life with her, and I don’t know if I was ever a father, or if she remarried. I chose to leave that part of me behind when I became the thing that I am now, and I have never even considered the thought of finding a woman to bring into this new life of mine. I wouldn’t wish this on anyone who I cared about. It isn’t as glamorous as the movies make it seem.

My death as a mortal happened at the end of October. It was when my contract was set to expire, and when my reign as Prince Dracul would end forever. I made the deal when I was in prison and feverish and I don’t remember what the terms were, I was convinced that I was talking to myself the whole time, but here I am.

The only regret that I have is that I was not given more time.

I suppose that, looking back on it, I would have been killed sooner than I would have liked had I not been given over to the unlife I live now.

I was just beginning to enjoy being Prince again. The old bloodlust returned, the fierce pride in my kingdom, the desire to make it better. I am, after all, my father’s son.

I was not ready to go, and two months into my final reign and I was forced to give it all up, instead of using my powers to rule as an immortal Prince and put and end to the fighting once and for all. Alas, I was unwelcome in my homeland once the deed was completed.

So I allowed my death to be exaggerated and my doubles were killed in different skirmishes. My “head” was brought to Constantinople when my third and final double was killed and it solidified the end of Vlad Dracul.

I was, however, already dead by the time this was happening. I died on the night of October 31 and was reborn in the early hours of November 1 in the year of 1476.

My mortal death was one that was not greeted by a funeral. Neither deaths that I suffered through were particularly peaceful or celebrated in the way that you would want it to be. The men who were my doubles were treated poorly, hastily buried when it was realized that they were not truly me, and spit upon and cursed for their treachery and lies. My first two doubles were left in shallow, unmarked graves where they fell. My men in both skirmishes were beaten back as the Ottoman forces grew more determined to take the body of Vlad Dracul back to their leaders.

When it was discovered that I had tricked them, the Ottoman forces were in such a rage that stories of their anger spread across the country like wildfire. I had tricked them, twice, and sent them into a howling fit. I had made them a laughingstock across the country and word of their stupidity passed the lips of everyone who had once feared them. This would be the quiet legacy of mine that would colour the stories of my brutality. Vlad Tepes was as clever as he was brutal, and not even the Turks were safe from my trickery.

I watched these things happen from a distance, unable to help, unable to interfere lest I truly be caught and killed. I was already living on borrowed time, and I had so much to do to set my affairs in order before I was to be whisked away from my mortal life and taken into the clutches of the dark of night as a vampire.

I certainly did not get everything done that I had wanted to and the creature who had offered me immortality came to collect his due right on schedule.

I fought against him for a week.

“Mortal one, it is time,” he said the first night he found me. I was going over military strategies for the next leg of the fighting that I was about to lead.

“I cannot come with you right now,” I argued. “We are winning for the first time in weeks, and I am desperate to take this next leg of the journey. What is one more night without me when there are hundreds of men, my own and Ottoman alike, upon whom you may feed?”

“You drive a hard bargain, little Mortal, but I will allow it.”

I argued with him this way for a week. Always one last thing to do. One last leg of the battle, one last conquest, one last woman. One more night, master, please, I beg you.

I was taken in the night, without warning. I had no time to argue with him when he had made up his mind that I had to be stopped. At this time, my “head” was just arriving in Constantinople, and I hadn’t seen my men that day. As far as they knew, I had been killed on the battlefield, when really I had been in a small hovel, hiding and trying not to let my men know that I had not been killed. My master came upon me that night as soon as there was no one around. I was reading by candlelight, waiting for my men to arrive with reports. I had two men I trusted with the plan of my doubles, and they had been keeping me abreast of all the happenings of the war in my absence. My master arrived and startled me.

“You are not who I was expecting,” I told him, brusquely.

“Your men believe you dead.”

“And I have stepped in and bent their minds. They now know you are dead, there is no more time to stall.”

Whatever he did to me, I could not argue. He was upon me in a flash. I could not scream, I could not fight back, I had lost control of my body and my mind and I fell into stunned silence as he fell upon me with the swiftness of a wolf. I sat there, reeling from the wounds inflicted upon me that would grant me my immortality; I felt that I had not accomplished enough. I was forty-five years old when I died. I was alone, in a hovel, left to die as my blood seeped out from two delicate holes in my neck. I was left to suffer through the slowing of my heart; with nothing to keep me company except the memories of life only half lived. I hoped that I would see my brothers soon, that I would join them in death to be welcomed into their embrace in the afterlife, but that was not true. I forgot that, as my life drained away and my breathing became shallow and laboured, that I would not be joining them. Not yet.

I still had a contract that needed to be fulfilled.

Read another excerpt on Wattpad

Kai Kiriyama is a Canadian Asgardian geek with an affinity for Pokemon and Shakespeare. Accomplished at divination through crystals, pendulum, tea leaf reading and palmistry, Kai oftentimes frightens herself (and her clients!) with the accuracy of what she predicts. Convinced that both her to-read and to-write piles will never be completed, Kai tries not to worry too much about it. Oftentimes, you can find her hanging around on twitter and dispensing dubious advice through her blog.