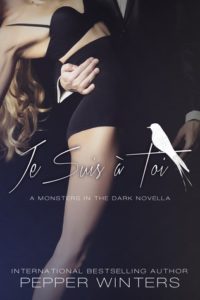 Q made me the happiest esclave in the world. He gave me his heart, his empire, his ruthless unforgiving love. And life finally left us in peace.

A man like my maître has special needs though, growing stronger as our lives intertwine. The only way to survive his monster is to agree to all his desires.

Including his latest wish.

And I won’t refuse. 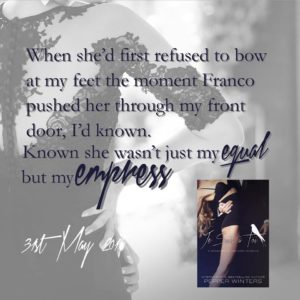 Her head bowed, her legs spreading wider, revealing the gift I worshiped daily between her legs. “I did. I look forward to my reward.”

My lips curled; the darkness enveloped me. The beast inside stretched, unsheathing its claws, lengthening its spine in preparation.

I stalked toward her and fisted her hair. I fell more in love than I already was.

This woman made me come alive. This woman would end up killing me. But my life was already hers, and I would die gratefully on the pyre of her affection.

“You don’t get your reward until you’ve been punished.”

Her gaze glittered with rebellion and retaliation but not one ounce of fear—the perfect cocktail for a bastard like me. “Go ahead. You’ll never break me.”

“Ah, my sweet, sweet Tess. That might be the case…” I nipped at her bottom lip. “Mais ça ne m’empêchera pas d’essayer.” But it won’t stop me from trying.

Dropping the black bag by her spread legs, I tugged on her right plait. “Up.”

Unfolding immediately, she stood quivering before me. Her chest rose and fell, imprisoned in the dark red bra I’d handpicked for her. Her flat stomach shadowed with faint bruises from previous nights, and I traced the bite mark I’d left on her hipbone after our parlour games.

I wanted to do what I’d planned now. To get it over with before she could have second thoughts. But I restrained myself. Anticipation would make it that much sweeter.

Gripping her jaw, I kissed her with a wet-as-fuck dominating kiss before pushing her backward to the bed.

She obeyed every prompt. Falling onto the bedspread, she watched me with desire-glittering eyes.

This room was very much like our assigned accommodation, only smaller. The fireplace roared with heat and the four-poster bed hung with midnight blue drapery rather than forest green.

My jeans and t-shirt became too tight as my body prepared to tease and torture.

Tess squirmed on the mattress as I moved toward her and yanked her up the bed by her arms. The moment she was in the middle, I uncoiled a piece of Japanese silk rope from my pocket and looped it around her wrist.

With a sharp smile, I secured her to one of the four bedposts.

It was a risk tying her down like this. After all, she’d done the same to me when I’d given her my nightmares to hopefully break hers. However, no memory of that day hovered in her gaze. Her skin already flushed with lust as I fastened her other wrist and moved toward her ankles.

She didn’t speak—she was too well trained—but her eyes never left my ministrations.

She gasped as my fingers ran around her ankle, cupping her heel protectively before wrenching her legs apart and securing them as tight as her wrists.

Once finished, she lay spread-eagled with no hope of escape.

I stood and surveyed my fucking delicious woman. The lingerie barely hid her bare pussy, shadowing it in red lace while her bra couldn’t hide the pinpricks of nipples begging me to bite.

Running a fingertip from her instep to her clit, I murmured, “So pretty and no chance of running. What shall I do with you?”

Her hands fisted, her lips parting with breath. “Anything…do anything you want.”

“Anything?” My fingers pinched her pussy, indenting her soft flesh with the lace protecting her.

She gasped, white cheeks flushing so prettily. The scrap of material couldn’t hide how wet and hot she was, drenching the delicate underwear. Her desire matched mine. I was rock-fucking-hard for her.

“I’ll give you a choice, Tess.” Rubbing her pussy, I pressed hard and swift. “Pain or pleasure first? You make the call.”

Her back bowed as I stabbed at her entrance, prevented from entering her by the lacy garment. Soon, that bastard chastity belt would have to be sliced away. But for now, it kept me focused. Gave me a barrier I wasn’t permitted to break.

I shook my head, stealing my hand from her core and bending to unzip my black bag. “Wrong choice.”

“Life taught me an eternal love will demand the worst sacrifices. A transcendent love will split your soul, cleaving you into pieces. A love this strong doesn’t grant you sweetness—it grants you pain. And in that pain is the greatest pleasure of all.”

Je Suis A Toi by Pepper Winters releases on May 31st. 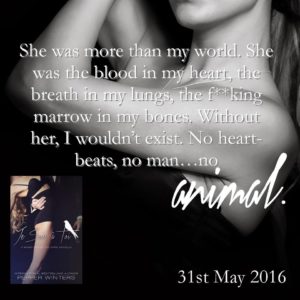