Hollywood bad boy Brad Sinclair always gets his way, whether it’s the role he wants or the bikini-clad model he has to have. But when a bombshell gets dropped in his lap in the form of a dimpled five-year-old from a forgotten relationship, he knows his life is about to change forever.

Cara DuMont isn’t exactly thrilled when she gets assigned to be the nanny for the latest box-office king. She has one rule: no celebrity fathers, especially single ones with devilish good looks and rock-hard abs.

But as soon as Cara meets Brad and his adorable little girl, she knows she’s in for a world of trouble. Because there’s something about the way Brad looks at her that makes her believe that some rules are meant to be broken…

Coming To Retailers on May 1st !!

He was tapping on my bedroom window. It was 2:17 in the morning.

I got out of bed, dressed in sweatpants and black T-shirt and slapped the window open. He practically fell through it, adorable in his wet tuxedo and red eyes.

He leaned back out the window, paused. “Do you like me?”

“Against my better judgment, I do.”

He was so drunk he could barely stand.

He gave me a salute and walked right through a sprinkler, toward the front house. I closed the window. Brad was lying in the grass facedown, arms and legs in a big X, getting sprinkled on.

I could leave him out there.

I could, he deserved it. But I couldn’t.

I put on sneakers and a hoodie and went outside. He was face-first in a mud puddle. The sprinklers had shut off.

He didn’t move. I pulled his arm until he was on his back, then pulled both wrists and pulled forward. If I’m making it sound easy, it wasn’t. I slipped and fell in wet grass, and grunted like a tennis player. But I got him to sitting. Half his gorgeous face was dotted with mud.

No answer. I slapped him. Nothing. Slapped again, harder. He groaned.

Then I pulled my arm back and really hauled off and whacked him.

I crouched, getting my shoulder under his arm.

“Do you know you’re beautiful?”

He looked at me, the weight of his head tilting his face at an angle to mine.

“You’re the queen of the house.”

We lurched up. Took a step left. Adjusted. Stood steady.

“Can I just sleep here?”

“No. Nicole isn’t going to find your drunk ass on the lawn in the morning. Lean on me.”

We took one step forward, then two. I held his wrist with one hand and his waist with the other. The front of his tuxedo shirt was brown with mud. I got wet wherever his clothes touched me.

“Do you have fantasies, ever?” He hopped onto a new subject as if it was completely natural.

“Like about what?” I asked. His arm around me, his breath soft in my ear. Even his dependence was kind of a fantasy.

“You know what bothers me about fantasies?”

“Watch this chair here. Whoa.” I pulled him left, narrowly missing tripping over a lounger.

“You never know if you’re getting it right,” he said.

I turned to him, and found his eyes taking up my entire field of vision and my nose two inches from his.

We almost tripped on the entrance. I swallowed my lungs, stomach, and heart in one gulp. He was drunk. He didn’t mean it. He never thought about fucking me.

He was my boss. 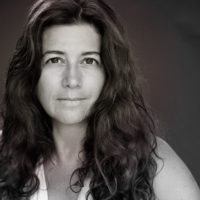 CD Reiss is a USA Today and Amazon bestseller. She still has to chop wood and carry water, which was buried in the fine print. Her lawyer is working it out with God but in the meantime, if you call and she doesn’t pick up, she’s at the well, hauling buckets.
Born in New York City, she moved to Hollywood, California to get her master’s degree in screenwriting from USC. In case you want to know, that went nowhere, but it did embed TV story structure in her head well enough for her to take a big risk on a TV series structured erotic series called Songs of Submission. It’s about a kinky billionaire hung up on his ex-wife, an ingenue singer with a wisecracking mouth; art, music and sin in the city of Los Angeles.
Critics have dubbed the books “poetic,” “literary,” and “hauntingly atmospheric,” which is flattering enough for her to put it in a bio, but embarrassing enough for her not to tell her husband, or he might think she’s some sort of braggart who’s too good to give the toilets a once-over every couple of weeks or chop a cord of wood.
If you meet her in person, you should call her Christine.

One Response to “Excerpt Reveal: Bombshell by C.D. Reiss”