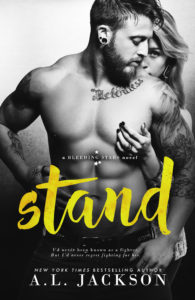 Zachary Kennedy has never been known as a fighter, but he’ll never regret fighting for her…

When my brother died, everyone thought I was just the good guy who stepped up to take his place in the band.

No one knew what I was hiding. The one thing I’ve been fighting for.

Not until one chance encounter with Alexis Kensington.

I knew better than to touch her, but now that I’ve had a taste, I can’t get enough.

Her kiss becomes my air. Her body my salvation.

She needed a savior and somehow she became mine.

Taking her was a betrayal. But keeping her means risking everything.

One look at Alexis Kensington, and I know she’s worth the fight. 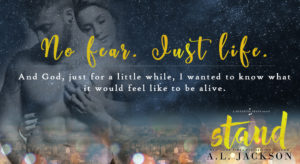 Sucking in a breath, I peeked over my shoulder. My heart trembled and shook.

Staring back at me were brilliant brown eyes that raged and stormed and promised they were getting ready to wreak a new kind of havoc on my life.

On the opposite side of the street, he pushed from the wall where he’d been watching. He didn’t hesitate. He came straight for me. His gaze only broke from mine to dart back and forth at the small street before he began to cross it in long, purposed strides.

A frenzy lit. A quiver of attraction that rocked and provoked.

I was fixed to the spot, gaze enraptured as I watched the intricate ink dance and play over the corded muscles that bunched and flexed in his thick arms. So much strength in his body and so much beauty in his being.

I swore he stole the air when he stopped two feet away. Hands fisted, he glowered over me.

I stumbled my way through the choppy words. “What…what are you doing here?”

His were hard. “Think I could ask you the same question.”

I shook myself out of the stupor. “Are you following me?”

It came off as an accusation that was somehow half-pleased and half-offended.

But I knew it was even more than that.

Over the last three weeks, I’d spent too much time wondering if I’d ever see this beautiful boy again.

“Maybe.” Frustration laced his tone. At him or me, I couldn’t tell.

I blinked at him, tongue-tied, my confusion and surprise tumbling out. “That’s just…weird.”

God. I was brilliant.

But what was I supposed to say? This boy caught me unaware at every turn, always at the advantage.

He almost laughed, this sound that was exasperated and filled with disbelief. “Weird?”

I bit at my lip, fighting a smile that really shouldn’t have been there. But he was here, again finding me when I felt helpless and vulnerable.

I nodded emphatically, clutching the lightness that whispered through the air. “That’s right. Weird.”

With his index finger, he scratched at the back of his head. He chuckled low, this sound that rumbled through my senses and warmed my belly. “I’m sure there are plenty of other things we could call this other than weird, don’t you think? This is just…”

I frowned when he trailed off and took a step in his direction. “What?”

Helplessly, he looked back at me. “I can’t do this, Alexis. I’ve got a sh*t show getting ready to blow up in my life, and the only thing I can think about right now is you. Can’t go to sleep at night because I’m terrified you might be sneaking off and doing something that’s going to land you in trouble again. That I might not be there to save you next time. And when I do finally nod off? I wake up in the morning panicked, praying you’re okay and having no way to make sure.”

His tongue darted out to wet his lips. My gaze followed, entranced by the thick bob of his throat as he swallowed.

“I don’t have the first clue what you’ve done to me, but I’m not sure I can handle whatever it is I’m feeling.” 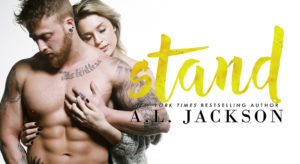