A digital novella from Penelope that is 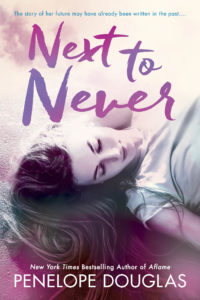 Under the close watch of the men in her family, Quinn Caruthers has found it nearly impossible to spread her wings—or even date—without her three older brothers, Jared, Madoc, and Jaxon, jumping in to hover. And when a family friend—several years older—from her childhood still holds her heart, she knows they’re going to be a problem. Lucas Morrow is a man, and knowing her brothers, he may as well be forbidden.

But years ago, Lucas left town and shows no signs of returning. Quinn knows she shouldn’t wait for him anymore.

Until a package turns up on her doorstep with no return address and its contents reveal family secrets that threaten to turn her world upside down. She’s never asked about the path of her parents’ romantic history, but she soon learns their happy marriage had a very rocky and passionate start.

As she starts to see things around her with new eyes, Quinn will have to make tough choices about whether she’ll keep waiting…or finally go after what she really wants.

Look for a PRINT Edition of The Next Flame

to hit outlets on May 2nd…. 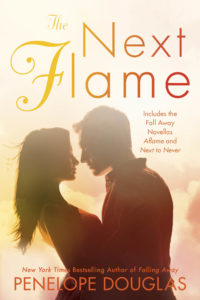 This book will contain the novellas

Next to Never AND Aflame !!

Penelope Douglas is a writer living in Las Vegas. Born in Dubuque, Iowa, she is the oldest of five children. Penelope attended the University of Northern Iowa, earning a Bachelor’s degree in Public Administration, because her father told her to “just get the damn degree!” She then earned a Masters of Science in Education at Loyola University in New Orleans, because she HATED public administration. One night, she told the bouncer at the bar where she worked that his son was hot, and three years later she was married. To the son, not the bouncer. They have spawn, but just one. A daughter named Aydan. Penelope loves sweets, The 100, and she shops at Target almost daily.