I want to thank St. Martin’s press for giving me these books to review. 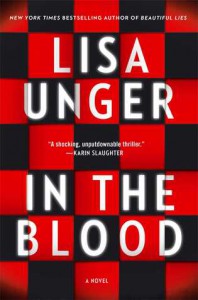 In the Blood by Lisa Unger

Lana Granger lives a life of Lies. She has told so many lies about where she comes from and who she is that the truth is like a cloudy nightmare. She can’t quite recall. About to graduate from college and with her trust fund almost tapped out, she takes a job babysitting a troubled boy names Luke. Expelled from schools all over the country, the manipulative young Luke is accustomed to controlling the people in his life. But, in Lana, he may have met his match. Or has Lana met hers?

When Lana’s closest friend, Beck, mysteriously disappears, Lana resumes her lying ways – to friends, to the police, to herself. The police have a lot of questions for Lana when the story about her whereabouts the night Beck disappeared doesn’t jibe with eyewitness accounts. Lana will do anything to hide the truth, but it might not be enough to keep her ominous secrets buries: someone else knows about Lana’s lies. And he is dying to tell. 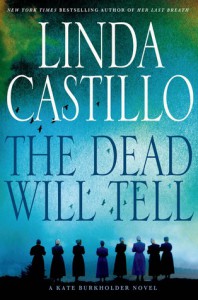 The Dead Will Tell by Linda Castillo

1979: An Amish Father and his four children perish in a robbery attempt gone horribly wrong. His wife disappears to an uncertain fate. Fourteen-year-old Billy Hochstetler is the only survivor of the unspeakable tragedy.

2014: Everyone in Painters Mill knows the abandoned Hochstetler farm in haunted. But only a few know the terrible secrets of that tragic night thirty-five years ago-and, one by one, they’re turning up dead.

Because I got these at the same time for the purpose of a joint review, I am doing just that J.

Both of these books deal with a terrible secret and how that secret can ruin lives and relationships. Although it is not explicitly said, both books also deal with the psyche and how genetics and life events can affect emotional wellbeing. Essentially both of these stories are about the darker side of the human brain and how one’s brain can turn with manipulation and coaching. With Lana it was Luke that could manipulate individuals, in Kate’s situation it was the ghost of an individual that was killed more than 30 years previously.

Both of these books have twists and those twists will shock you. In Ms. Unger’s book the twist was a little predictable about three quarters of the way though, well one of the two twists were, the other one was completely blindsiding. Ms. Castillo’s book the twist that was present was something that I did not expect and it wasn’t until the last chapter that it came into light. I read both of these books in a combined 2.5 days if that gives any indication on how good they are, in fact I read Ms. Castillo’s book in less than a day.

In the blood is a book that looks at how traumatic events during one’s childhood can impact their entire life. It is a good book that switches between present day and the diary of a new mother who is dealing with a young son who has issues since he was born. It is a haunting tale of what one mother attempts to do when faced with a child that could very well grow up to be a mass murderer. I really enjoyed the tone and the push of the novel which propels the book.

With The Dead will Tell it is all about the Amish community and how they deal with the “Englischer” investigating a murder in their community. Not unlike In the blood, the prologue is heartbreaking. I felt like I was there alongside Hoch. That is how vividly Ms. Castillo is able to weave a story. With her insertion of Pennsylvanian Dutch when Kate, a former Amish member turned chief of police speaks with Amish families it shows that Ms. Castillo does not just want to tell a story but does her research to ensure that her novel is authentic and meaningful not just in plot but in voice.

Between the two I liked The Dead will Tell more, and here is why, I liked Kate more than I liked Lana. Although I know that Lana had her issues and she was just living her life the best that she could under the circumstances, I was not a huge fan of her internal voice. For me it became grating. With Kate Buckholder, the former Amish member turned chief of police I enjoyed her internal voice. She was stronger than Lana and even though she had her moments of weakness when it came to her boyfriend the BCI agent, she portrayed a sense of professionalism. She was also comfortable with herself unlike Lana who was unsure of who and sometimes what she was. Don’t get me wrong, the tone for Lana was perfect for the book, and maybe if I had not read them back to back I would not be comparing them this way, but for me Lana was not my favorite character, while I did really enjoy the book.

I give The Dead Will Tell 4.5 Baskets, while I give In the Blood 4 Baskets.

One Response to “Double Review: In the Blood & The Dead Will Tell”