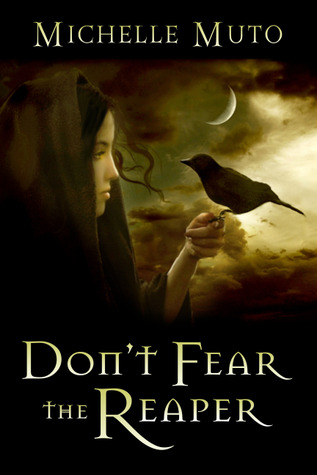 Grief-stricken by the murder of her twin, Keely Morrison is convinced suicide is her ticket to eternal peace and a chance to reunite with her sister. When Keely succeeds in taking her own life, she discovers death isn’t at all what she expected. Instead, she’s trapped in a netherworld on Earth and her only hope for reconnecting with her sister and navigating the afterlife is a bounty-hunting reaper and a sardonic, possibly unscrupulous, demon. But when the demon offers Keely her greatest temptation—revenge on her sister’s murderer—she must uncover his motives and determine who she can trust. Because, as Keely soon learns, both reaper and demon are keeping secrets and she fears the worst is true—that her every decision will change how, and with whom, she spends eternity.

Before I get into the teaser and such, I have to say, Michelle Muto is one funny lady. Now I will be honest, I have not read her books. But just from general conversation I have little doubt I will like, if not love, them. She is my partner in Dunkin Donuts caffeine addiction. She makes my heart happy :-).

“Daniel, what did you do out there?” I had no idea why his actions had
surprised me, but they did. Maybe because people didn’t self-ignite in the living
world.

“Wasn’t like I didn’t warn them.” He stalked straight past the security
guard at the desk. “Wasn’t like I had a choice, either. You’ll see.”

I had to sprint to keep alongside him. “What do you mean you didn’t have
a choice? Not that I particularly care for those asshats back there, but I didn’t see
anyone bending your arm behind your back.”

He rounded on me. “Cheap talk for someone who killed herself because she
didn’t think she had a choice! Worse for someone who’d love to fry her sister’s
killer. You wanted to see a few parlor tricks? Fine. There’s plenty more.”
I sucked at rebuttals. He was right. Worse, I was afraid to push him too far.
I recalled the way those people had looked at me outside. Right now, I needed
Daniel on my side to stay safe. And I needed him if I was going to get even with
my sister’s killer.

He stopped, took a deep breath and leaned against the wall, hitting his
head hard enough to put a hole in the plaster. Remarkably, it stayed intact. His
eyes were closed, and I could tell he was struggling to control himself again. But
instead of anger, I thought it was frustration this time.

“You have no idea what’s going on here, Sunshine. I’m a demon. I don’t
have much of a choice when confronted. And neither will you.”
The muscles in his jaw worked as he struggled to put his temper back in
check.

I understood more about Daniel in those few minutes than I had the entire
twelve hours of my nonexistence. Like me, he was hurting. I moved closer,
no longer completely terrified of the monster contained under the surface—
the monster that Daniel probably didn’t like any better than the earthbounds
standing outside. Metal Girl and her friends had a point. He wasn’t as bad-ass
as he thought. At least, if there was a chance I was going to be like him, I hoped
that was true. Because, for what I wanted to do to Pete, I was more monster than
Daniel.

“What happened, Daniel? Wrong place at the wrong time? Or did
something happen with your family, too?”

“Don’t ever talk to me about my family, all right? Don’t go there.” His
voice had an odd quiver to it.

I stepped back, stunned and somewhat hurt at his sudden outburst. “Sorry.”
Still, how awful being a demon must be for him—an eternity of never being
able to control his anger. Never being able to do anything to defend himself other
than by the most gruesome of methods. Maybe he honestly didn’t have much of a
choice.

Daniel laughed. “Funny, isn’t it? How we never saw the consequences to
our actions that brought us here.”

“Yeah,” I said in complete agreement. But how could we have foreseen
this, this afterlife? “Yeah. Real funny.”

He steadied his eyes on mine. “Now that you know what I am, what I’m
like, do you have sympathy for me?”

There wasn’t any hatred or anger in his tone. His face was no longer hard
and set. The soulless eyes I’d seen outside weren’t there. Now, they were soft and
brown, although the pupils were dilated. I swallowed hard. “I don’t think you’re
what you make yourself out to be.”

“Do you want another demonstration? I can show you what demons really
look like.”

Deep inside, how could I not? He was a demon. Yet, what I’d seen outside
wasn’t likely the Daniel who’d once been human. My instincts said that whatever
he’d done, he wasn’t any more demon material than I was, and that scared me the
most.

“Well, don’t!” He shoved away from the wall and stalked off. “Soon, you’ll be
just like me.”

Writer of urban fantasy, the paranormal, and all things eerie and curious. Lover of scary books and funny movies, sports cars, chocolate, and changes of season. Owned by two incredible dogs and an iMac. Author, wife, sister, freelance tech writer, and IT geek.

One Response to “Book Tour: Don’t Fear The Reaper by Michelle Muto”