The right words can save your life.

For fans of Nicholas Sparks and Jodi Picoult…

A soldier falls in love with his battle buddy’s sister through their letters and returns home from Afghanistan with a secret that could destroy their fragile relationship. 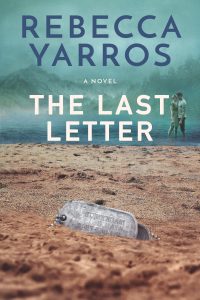 If you’re reading this, well, you know the “last-letter” drill. You made it. I didn’t. Get off the guilt train, because I know if there were any chance you could have saved me, you would have.

I need one thing from you: Get out of the army and get to Telluride.

My little sister Ella’s raising the twins alone. She’s too independent and won’t accept help easily, but she has lost our grandmother, our parents, and now me. It’s too much for anyone to endure. It’s not fair.

And here’s the kicker: there’s something else you don’t know that’s tearing her family apart. She’s going to need help.

So if I’m gone, that means I can’t be there for Ella. I can’t help them through this. But you can. So I’m begging you, as my best friend, go take care of my sister, my family.

Please don’t make her go through it alone.