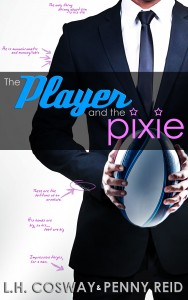 Sean Cassidy is a cold-hearted brute… or so he’s been told. Frequently. By everyone.

His blonde locks, baby blues, and rock hard bod make ladies the world over drool with desire.  As the rugby world’s second most infamous player, he should be basking in his success. But Sean has never been content settling for second place, and his frequent confrontations with Lucy’s big brother leave him cold. And when he’s cold, his compulsive little problem lands him in the lap of Lucy Fitzpatrick.

Sean has a problem only Lucy can solve. Lucy has a problem only Sean can fix. The solution seems obvious: you scratch my back, and I’ll bail you out of jail. But when their business arrangement unexpectedly leaves Sean scorching hot and Lucy on the precipice of inner peace, can they convince the world—and Lucy’s big brother in particular—that this is the real deal?