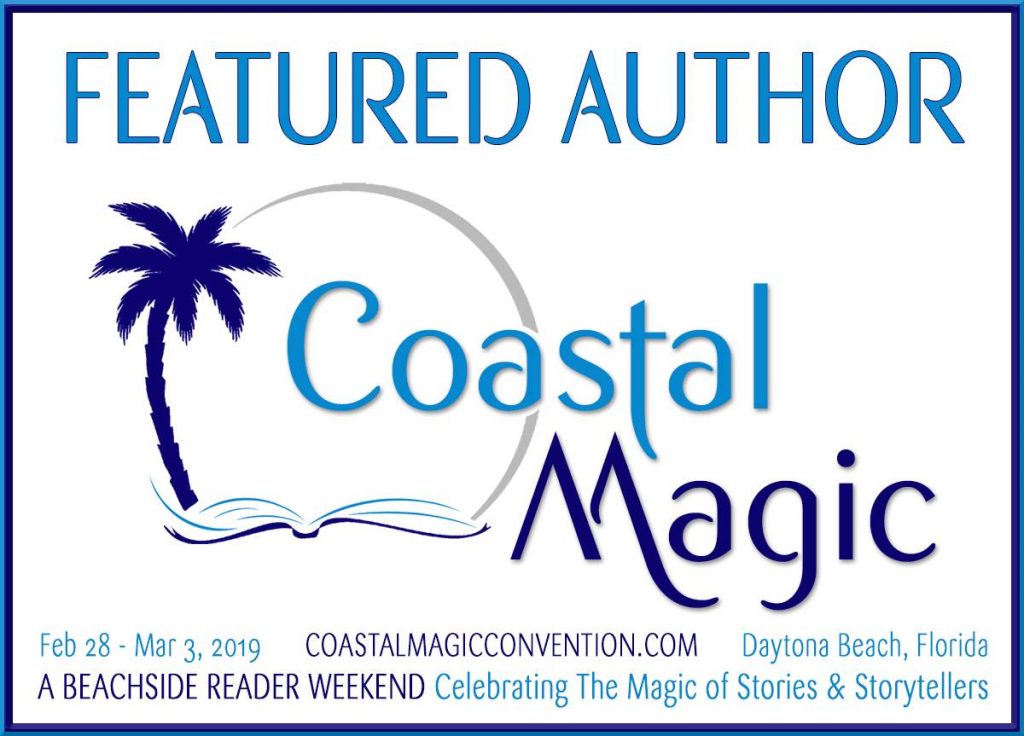 Hi All! I am SUPER excited to talk to today’s Featured Author for Coastal Magic – Shaila Patel! I met her last year and she was just fantastic, so I knew I had to have her on the blog to share her loveliness with you all! And yes, tickets are still available! Come hang out with Shaila, me, and so many other wonderfully wacky people in just a few weeks!

Welcome Shaila! Let’s kick this shindig off with you telling the readers a bit about yourself?

I’m an Indian-American young-adult author of a paranormal interracial romance series (whew, a mouthful!) with a heroine just like me and a gorgeous Irish empath. It’s the story I would’ve given up my Hello Kitty sticker collection for when I was a kid!

When did you start writing?

Short answer: Technically since I was nine, but I began writing genre fiction in 2013 and became published in 2015.

Long answer: I started waaay back when I was nine but never really thought of writing as a career until my senior year of high school. My parents—being the stereotypical Indian immigrant family that they were—had forbidden me to get an English degree, so instead I became a pharmacist. I managed to write literary short stories for years on the side, but nothing ever inspired me to do more with my writing—until 2013. My dad had died the previous year, and I still don’t know why or how, but it seemed to shift me out of my writing rut. I made my first attempt at genre fiction and ended up writing two manuscripts in one year. SOULMATED became my debut novel.

What was your journey to publishing?

After I’d written Books 1 and 2 in the series, I worked on editing them for about a year and a half. I submitted SOULMATED (book 1) to two publishers in 2015 for the first time—and they both offered! Yes, I know exactly how lucky I am and how rare it is for that to happen! 🙂

It’s hard to narrow down specific authors, but sharing what my favorite types of books are probably says a lot more about me. Happily ever afters definitely top the list! I love resourceful and intelligent heroines who are vulnerable and maybe even a bit unsure of themselves as well. (I can relate!) I also love romances where the main characters fall in love over letters, emails, or text messages. There’s something genuine about communicating over the written word like this and uncovering the real essence of a person. It’s probably why I love Cyrano retellings so much!

If you could only eat one food for an entire month, what food would you pick?

Cheese, cheese, oh glorious cheese! Lol! (I must have been a mouse in my past life!)

Ha! It’s a good thing you aren’t lactose intolerant … at least I am assuming you aren’t based on that response! Which of your characters is the most like you? Which is the least?

As for which character I’m most like, it’s a toss-up between Laxshmi (aka “Lucky”) and Liam’s mother, Moira. Growing up, I’d struggled with some of the same cultural restrictions and expectations as Lucky does in the story, but as an adult, I tend to be just as analytical, curious, and level-headed as Moira.

Have you ever written a person into your books just to get revenge on them, and what did they do to earn your wrath?

No, but…ahem…I reserve the right to do so in the future. <evil grin>

I will make a mental note to stay in your good side then. I don’t need to fictionally murdered. Again. 🙂 What are you most excited about for Coastal Magic? Have you ever attended this or any convention before and what is the best thing about it?

Yes, I attended Coastal Magic in 2018 and loved it! And this year I look forward to reconnecting with the friends I’d made, as well as taking a break from life to lie on the BEACH! I think what I love the most about conventions is meeting the readers and my fellow authors. Writing can be such a solitary venture, so coming to a con always recharges my creative and motivational batteries!

Check out Shaila’s SOULMATED books below, and I will be picking up my SIGNED COPIES in person when I see her at the end of February!

Irish royal empath, eighteen-year-old Liam Whelan, wants nothing more than to stop the frustrating search for the elusive girl destined to be his soul mate. The rare union will cement his family’s standing in empath politics and give the couple legendary powers—painting a bullseye on Liam’s back and hers.

All Indian-American Laxshmi Kapadia wants is to free herself from her traditional mother’s ultimatum: graduate from high school early and go to medical school or have her marriage arranged. Neither allow her to make her own choices and pursue a career in dance.

When Liam and his family move next door to Laxshmi, he’s immediately drawn to the purity of her emotions. And with Liam, Laxshmi finally has the freedom to be herself. The problem? She isn’t an empath. Now Liam has to decide just what he’s willing to sacrifice if he can’t prove she’s The One.

With Liam’s father threatening to continue the search elsewhere, and Laxshmi’s mom forcing her to stay away from their handsome neighbor, will Liam and Laxshmi defy expectations and embrace their destiny? Or is the risk of choosing one’s own fate too great a price for the soulmated?

Empath Liam Whelan is determined to protect Laxshmi “Lucky” Kapadia, the girl he loves, at all costs–even if it means breaking her heart to keep her alive. Stopping the joining cold means Liam’s life is in danger from the Soul Seekers and the ruthless Minister Gagliardi who now has designs on Lucky. Liam has no choice but to find the strength to fight his desires, fight the joining, and fight fate.

After the unthinkable happened, Lucky’s “hallucinations” have been working double-time. Heartbroken and plagued by doubts, she meets a man who gives her a mind-blowing explanation for her predicament. Her apparent savior provides her with an escape from her hell: run away with him or return to her drab existence and watch Liam move on with her heart in his hands. All Lucky ever craved was to be in control of her own fate, but when her only choices fight against her heart, can she find the strength to battle for what she wants?

As an unabashed lover of all things happily-ever-after, Shaila Patel’s younger self would finish reading her copy of Cinderella and chuck it across the room because it didn’t mention what happened next. Now she writes from her home in the Carolinas and dreams up all sorts of stories with epilogues. A member of the Romance Writers of America, she’s a pharmacist by training, a medical office manager by day, and a writer by night. SOULMATED, her debut novel and the first book in the Joining of Souls Series, was the winner of the RWA’s FF&P chapter’s PRISM award for Best Young Adult and Best First Book, second place winner in the RWA’s YARWA chapter’s ATHENA award, winner of the 2015 Chanticleer Book Reviews Paranormal Awards for YA, and the 2017 Author’s Circle YA Book of the Year Award. She loves craft beer, tea, and reading in cozy window seats—but she’ll read anywhere. You might find her sneaking in a few paragraphs at a red light or gushing about her favorite books online.