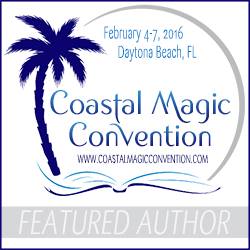 I am THRILLED to introduce you to a Coastal Magic staple – both the author and his topic! Damon Suede has attended CM every year since it’s inception, and Cinema Craptastique has quickly become everyone’s favorite thing. I am ASHAMED to say I did not attend the first year, but it has quickly become a requirement of CM for me. I mean HELLO – 2014 was LITTLE RED RIDING HOOD. *looks at blog* Obvious.

And Damon, what can I say except that he is a presence at these cons. EVERYONE knows Damon, wants to be his bestie, and I mean hello – that man is adorable in his pj’s. Come to Coastal Magic in February 2016 and see what I mean!

Perfect Fiasco: The Challenge of my Annual Craptastique Hunt

Over the past several years, Cinema Craptastique has become a must-attend for a rapidly growing throng at Coastal Magic and the RT Booklovers Convention.

year of her Coastal Magic Convention (then known as Olde City, New Blood). In the fall of 2011, Jennifer mentioned online that she’d love to do a snarky movie night and I replied that I LOVED cinematic bombs. We ended up talking on the phone for about an hour cackling about the possibilities.

What Jennifer didn’t know until that call was that I‘m a fiasco addict. I’ve been hosting bad movie festivals at my loft for almost twenty years. I’m hardcore about collecting flops and over time, I’ve built up a staggering library of the very worst in film. Friends in the industry send me screeners and I scour the internet for the bottom of the barrel: bizarre miniseries, amateur exploitation, subtitled historical softcore, and anything with starring Bo Derek or David Hasselhoff.

I’m relentless. I owned the first copy of Glitter available in Manhattan. I lined up to see Gigli its first weekend in the Catskills as one of three people: me and a Hasidic couple who made out (loudly…and more) the entire time. I proudly

I just can’t help myself.

Twenty years ago, folks found my crap-addiction distressing. Now in the era of Sharknado and pop-culture schadenfreude, snarky viewing is relatively common. The main difference between my love of garbage-film and the average Sci-Fi channel hokum is that those movies TRY to be terrible. What I dig is flops which earnestly, passionately believe they can be great if they can just fool enough people. Arrogance and incompetence make a killer comedy combo.

What the … *runs to google*

While I love MST3K and Z-grade filmmaking, Craptastique covers much different turf.

I come to bad movies from a life working in showbiz. Bad movies remind me of how easily we delude ourselves on set and how hard it is to make something wonderful. For me, the ineptitude reveals something beautiful about humanity: our infinite capacity to hope in the face of inevitable disaster. Awesome movies inspire awe, but ridiculous movies provoke ridicule. Believe it or not, Gustav Flaubert once said something (in an 1853 Letter to Louise Colet, one year into writing Madame Bovary) that applies here: “The most beautiful works have indeed this quality. They are serene in aspect, incomprehensible… pitiless.”

A great movie renders us speechless, but fiascos require interaction, participation. Their silliness and mistakes practically beg for reactions and commentary…and have

made Cinema Craptastique an essential experience for many people. Blame it on Flaubert!

Back in 2012, the first Craptastique was so successful that Laura Kaye and Lea Nolan approached RT and suggested a reprise-screening which was an even bigger hit. And so, Craptastique has become a cornerstone of my spring calendar every year. The Covenant, Red Riding Hood, and Legend of Hercules changed me in ways I can’t explain unless you watched them with me.

That being said, every year the hunt for the next Craptastique puts us through the ringer, because just being terrible isn’t enough. We screen these flicks for a diverse audience of romance fans. I may love goofy slasher flicks and softcore erotica of the 70s, but they’re not gonna appeal to a lot of the romance readers who attend Coastal Magic and RT.

Over the past few years, I narrow down the candidates by following a few simple rules:

love it, but definitely a bad fit for the Craptastiquers. Ditto other delicious bombs like Burlesque or The Last Airbender or any of the purpose-built disasters from Asylum Pictures. I love them, but not for our crowd.

At core, the best Craptastique movies center on a romantic relationship and intense emotions. Romance readers know how ridiculous cinematic passion can get and they’re happy to poke fun at the misfires aimed in their direction.

Look…modern audiences know when they’re being conned. Hollywood’s grim, calculating urge to pump out crap for the poor suckers who don’t know better is the pulsing heart of Craptastique. Witness The Covenant, Red Riding Hood, or Legend of Hercules. These films became our Craptastique gold standard for a reason: they are relentlessly venal, cold-blooded, and slick in the worst ways.

For our purposes, the best of all possible worlds is pretentious popcorn movies that pander to the lowest common denominator. A great Craptastique option looks gorgeous, but betrays its sleazy commercialism in every frame. And this is how we get from our pile of potential options to the one glorious disaster. Ideally we want:

For my money, that last part is the biggie. Humorlessness is critical for Cinema Craptastique. Any artist who can’t find humor and a sense of perspective in a project is sailing for the rocks. A movie which can’t poke fun at itself is begging to be poked.

Anyone who tells stories for a living, needs a sense of humor about the gig. When Halle Berry won the Razzie for Worst Actress for her (appalling) performance in Catwoman, she showed up in person and gave a spectacular speech. Mad props to her for that courage and insight, because she knew the film sucked; she took her lumps and laughed. That’s exhilarating to me. If an Oscar-winner can do it, we all can.

Look, art is a hard dollar. I’ve worked on bad movies, and the experience sucks. Showbiz is brutal and all moviemaking feels like climbing a mountain naked in a hurricane. For my money the most important quality of a Craptastique movie is that everyone involved ignored all the evidence so they could frantically climb the wrong mountain.

As Flaubert said, great art is pitiless. I’d argue that fiascos offer fertile ground for conversations and insight because

they leave so many gaps. We love them for their folly. We celebrate these crappy spectacles, not out of casual cruelty, but gratitude for what they reveal about our craziest fantasies.

Over the past four years, our crowd of Cinema Craptastiquers has grown enormous, both at the cons and around the world. With each outing, we’ve trended on Twitter and the audience keeps expanding exponentially. Celebrities keep getting sucked into it at a distance. I like to think that’s because folks enjoy poking fun at mass-market muck, and that there’s a silver lining in these silly films. They reveal a (painful, hilarious) truth about blockbuster entertainment and pop culture in general. Shitty films make for fertile ground.

As of this moment, we’re DEEP in the process of narrowing down our selection for Cinema Craptastique 2016. If anything we have too many options, but we’re eager to raise the bar. Can we do it? We hope so. And we hope that even if you can’t attend Coastal Magic in February or RT in April, you’ll join us in celebrating the best of the worst. 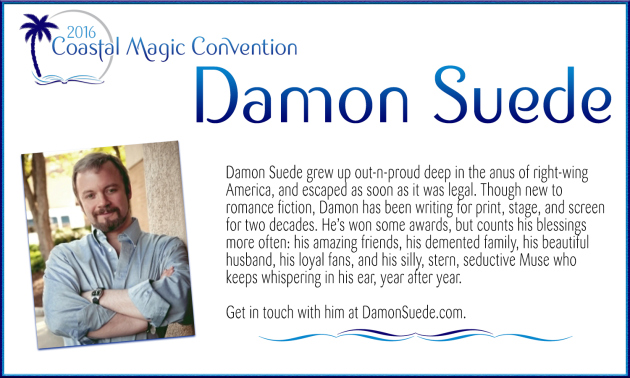 Get the full list of Featured Authors here, and to go ahead and purchase your tickets – you know you want to – you can do that here. Come hang out with me, and Damon. Everyone loves Damon. I promise you will too. He doesn’t know it yet, but he is secretly my gay BFF. I plan to get us custom made BFF necklaces. *laughs awkwardly* Of course I am just kidding! *looks around with shifty eyes*