I am thrilled to be a part of the Release blog tour! Matt is one of my most favorite people to interact with on Twitter, so when the chance came up to promote his latest book, I jumped on it. Plus, there is a HUGE giveaway at the bottom of this post. Seriously epic. And if you win, I win. So get your friends to enter here too. Let’s up all our chances! 🙂

Today, I not only have my review, but a guest post from the man himself, talking about what superpowers he would have if he had a chance!

The list for possible superpowers is endless, but for me, the answer is simple. Just like the magic in my books, I’ve had a bit of an obsession with the idea of being able to create and control the elements. If I had to pick any superpower, it would be that.

To be able to create and control fire, water, earth, air, and lighting, would make the possibilities endless. There’s very little you wouldn’t be able to do. I mean, you could create an entire career around those abilities that has nothing to do with stopping crime, although surely unleashing some fire-breathing crime fighting action would be on the list.

The government could contract you to put out forest fires that end up destroying cities and homes, and you could help the forest heal with the power of earth. You could use the wind and water to help steer dangerous storms away from populated areas, saving thousands of lives. You could wear a wicked superhero outfit and nobody would dare make fun of you, lest you shove 10,000 volts of electricity up their…face. You could control the air around you, allowing you the ability to fly, as well as handily get you the remote without having to get up. And this is just the beginning.

I could talk about all the possibilities for hours, and often times I find myself day dreaming about what it would be like to hold such abilities. But in short, if I could control the elements, I’d be unstoppable! Mwahahaha….*ahem* I’d be like Captain Planet without the terrible outfit and silly blue mullet. After uniting the shifters and calling in reinforcements, Chase has to face his toughest challenge yet: learning to control his emotions. But as tensions rise and his powers grow, controlling his emotions becomes the least of his problems.

Terrorized by a multi-shifter who is hell-bent on turning him, Chase questions just how far he’s willing to go to stop his father. Meanwhile, Tiki’s virtuous nature has placed him in the middle of Vincent’s past, leaving Chase to oppose a senate of vampires and defend a demon he hates.

Trying to balance his friends, his enemies, and his inner demons, Chase is left searching for answers about the Mark, his destiny, and where he can find the next soul piece. Stopping Riley is his top priority, but as more obstacles arise, he finds himself doubting all the decisions he’s made – especially regarding Rayna.

I have got to start off by saying for some reason I had thought this was the last book in a trilogy … no clue where I got that idea. I kept waiting for the book to wrap everything up and give me a complete ending. That didn’t happen. It is obviously not the last book, otherwise Mr. Merrick and I would have some words.

I like this whole series, in that each book picks up where the previous book leaves off. You follow Chase along his journey to avenge a death and save the world; and maybe even be happy when it is all over. He has some good friends, and they want to help him along the way, but he is such a typical man … “I can do it myself,” … yeah. Sure you can. 😉

Chase grows a lot in this book. I think he finally realizes he can count on others, helps people with their problems, and no longer carries the weight of the whole world on his shoulders alone. Most of the weight he bares, but events occur that force him to face the fact that he cannot carry that weight alone.

Without giving too much away … and it is hard not to with this book … let me say this: be prepared with some comfort food. And or tissues. And maybe a stiff drink.

If you haven’t checked out this series, what the heck are you waiting for? Go, right now, and get them. Seriously.

M.R. Merrick is a Canadian writer and author of  The Protector Series, a Young Adult mash-up between Urban and Epic Fantasy. Having never traveled, he adventures to far off lands through his imagination and in between cups of coffee. As a music lover and proud breakfast enthusiast, he’s usually found at the computer between a pair of headphones and in front of a large bowl of cereal.

And now the HUGE giveaway. If you win, I win! Here is what and how! 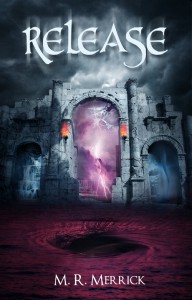 And remember, if you win, I win! (I get the same prize!) So enter often and always through Little Read Riding Hood! 🙂 (I like to win things)