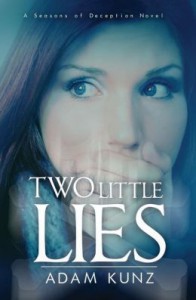 Lies can be very dangerous and deadly little things.

Almost four years after Laney Matthews survived a brush with death at the hands of Robbie Jameson, she has finally picked up the pieces of her life and started over. She’s made new friends, began dating again, attended countless therapy sessions, and is about to graduate in the spring from Blackburn University. Ever since that fateful night, Laney has tried to surround herself with positivity, and so far it’s been successful … but that’s all about to come crashing down.

When Laney receives news of Robbie’s release from prison, her bubble of security bursts and she begins to withdraw from everyday life. Her friends come to the rescue with a fun winter break getaway in order to clear their heads and shake off the end of semester finals. It’s here that Laney comes face to face again with Brent Lyles, the one true love that got away, and she begins to realize maybe he’s the exact thing that’s been missing in her crazy life.

Something’s amiss at the sprawling rental property though, and when things take a deadly turn, Laney and her friends are forced to fight for their lives. Has Robbie returned to finish what he started years ago? And is Laney prepared to stand up to her past demons once and for all?

The key to her survival this time though will be trust—a feeling she hasn’t embraced in quite some time.

Okay so many of you may or may not know that I am stingy when it comes to giving 5 baskets. Some people give them for books they really like, I hold it for a special book, a book that pulls me in, slaps me around, and then leaves me craving for SO much more. Some people may say like a lover, but I wont go there ;). Anyways, Two Little Lies by Adam Kunz, half of the C.A. Kunz dynamic duo is one such book. I may even say I would give it 5.5 baskets, if it was allowed. Now down to the actual book.

So you know in the first Scream movie there is a girl babysitting and a guy comes to attack her? Well the first chapter runs a little like that, but with better writing in my opinion. Laney, a young girl is going behind her parent’s back to watch her best friends younger brother while said best friend is off roaming the countryside (okay we actually don’t know what he is doing… yet). While there she is attacked by an individual believed to be a local serial killer. See the Scream theme? The last page of the first chapter is where this book runs away from scream and into my favorite books.

Oo did I tell you the first chapter takes place in Oregon, where I live? Oh I didn’t, well it does, so commence with the nightmares.

Laney attends college and has made some really good friends, well to get away from school and the likes of memories in her mirror they all head up a week long getaway in the mountains. There are boy interests, old best friend memories, new best friend memories, we are really in Laney’s head by the time they get to the pseudo cabin in the woods.

Commence the flash-backs, hallucinations, past friends, past enemies, twists, turns, double crosses, deaths, love, almost sex. Yup I think I got what happens in the last half :). To be honest this is a page turner, one that I stayed up until the wee hours to read. Read it, you will not be disappointed, I know I wasn’t.