by Jessica Sorensen
Also by this author: Nova and Quinton: No Regrets, , 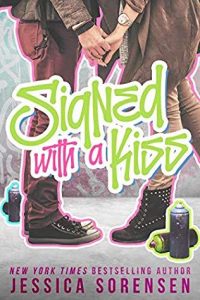 I used to be an artist, get good grades, and rarely got into trouble, but that changed the day my parents died.

After that, nothing about my life has been the same, except for my two best friends, Blaine and Masie, who have remained the two consistent things in my life. We’ve been friends forever, and they know almost everything about me. Well, Masie does. Blaine doesn’t know I’ve had a crush on him for years.

But even that changes when I walk in on Masie and Blaine kissing. Blaine also finds out about my crush, something I never wanted to happen.

So when West, Blaine’s best friend, and a frenemy of mine, offers to pretend to be my fake boyfriend, so Blaine will think I’m over him, I accept.

1. No kissing unless Blaine and Masie are around.
2. No falling for each other.
3. After we end the fake relationship, we go back to being frenemies.

The list sounds good in theory, but everything turns out to be a lot more complicated.

Signed With a Kiss is episode 1 in a SERIALIZED YA contemporary romance mystery series. Each episode is approximately 30,000-35,000 words or 150 print pages.

Purchase this release on AMAZON !!

It’s never easy losing a parent, but it is harder to navigate the perils of teenage drama without the guidance of either of the ones you hold dear. Everything in Alexis’ life is upside down after the loss of her parents. With a brother who is now her guardian, Alexis finds herself on the outside looking in where her family is concerned. The only constant in her life are the individuals that Alexis calls her friends.

Blaine and Masie are the constant that Alexis depends upon. The trio has been friends forever, but Alexis had kept secrets that neither knows about. With a crush on Blaine always swirling under the surface, Alexis will quickly discover that this friendship is about to blow up in her face. With no one else to turn towards, Alexis finds herself seeking refuge in the most unlikely place. Will the secrets that Alexis has kept hidden be the catalyst that results in her life unraveling?

Signed With A Kiss is the latest rerelease from author Jessica Sorensen. It follows Alexis through the struggles of teenage life. Not only does Alexis find herself struggling with the fact that she is in the midst of a betrayal, she also is harboring the after effects of a trauma that no one knows about. The secrets that Alexis manages to keep only deepen the despair that her family finds themselves within, especially after Alexis’ deeds are revealed.

What I found in Signed With a Kiss was the beginnings of a story that has a lot of plot laid out. There is a bit of a mystery lurking beneath the pages as well. While I am a huge fan of Sorensen’s, the story fell quite a bit flat for me. The rewrite was designed to enhance the series, but I found myself scratching my head when arriving at the end of the book. There is a DRASTIC and abrupt ending to the story.

Literally – the story randomly stops at a point in the story where you are dumbfounded. It’s not a cliff hanger or end of a scene. There is no wrapping up of the contents of that chapter, it literally just STOPS. I know that Sorensen pushes out a LOT of writing in a calendar year, but this is definitely not the type of thing I expect to encounter in any reading material. There is no conclusion, finality or continuation…..just an abrupt stop to a story that doesn’t have the pull one would expect after that many chapters. To say I was disappointed would be an understatement….

Jessica Sorensen is the author of The New York Times and USA Today Bestsellers, The Secret of Ella and Micha, The Coincidence of Callie and Kayden, and Breaking Nova, which are New Adult Contemporary novels. She also writes Paranormal series, including the Fallen Star Series, Shattered Promises, Darkness Falls, and the Death Collectors. She loves writing and reading and is an avid watcher of TV series The Vampire Diaries and Modern Family. An immense music lover, Jessica immerses herself in her music as she writes. She has a broad taste in music, and a list of favorite songs that goes on for miles! A few of her current favorite bands are Chevelle, Rise Against, Alkaline Trio, Brand New, Death Cab for Cutie, Flight 409, and Nirvana. Some of Jessica’s favorite “watch it over, and over again” movies include Anywhere but Here, Juno, Pride and Prejudice, The Hangover, and Bad Teacher.