Well … It NEARLY killed me. Since I live local (about 40 min from the hotel) I offered to let people ship things to me. So on Thursday I loaded up my poor car, which honestly couldn’t have taken another box, I even had stuff in the front seat! After car trouble and traffic I made it to the hotel to drop everything off in the capable hands of Karina Halle, Chelsea M. Cameron, and Kara from Great Imaginations. I then ran away to go pick someone up from the airport. During all this running around, I forgot to eat lunch, so I was hangry (hungry angry) so the 4 of us and Jennifer FUCKING Armentrout all went out to dinner. We were hot, gross, and tired, but none of us really cared. We were all hangry!

Karina, Jennifer, and Chelsea all starving to death

I am pretty sure we went to bed early, because the next day was Universal’s Islands of Adventure to go see Harry Potter! Well, Hogwarts castle at least. Again it was Karina, Chelsea, Kara, Jennifer, along with SL Scott, Katie Ashley, Ali from Ginger Read Reviews, and Carmen Jenner – who is from Australia – and a few other people who I am sorry I cannot remember all the names. It was a big group. I think there was a Heather … crap. Anyway, we rode some rides, had a surprise wet tee shirt contest (from riding the water rides), nick named Chelsea the bag lady, and had an all around amazing time.

The group in front of Hogwarts, but the lady taking the pic had a fail moment and didn’t get the castle

That evening was the pre-registration party where we scanned in as many tickets as we could, and let people mingle with some of the authors. Dinner that night was late, and this time it was Karina, Chelsea, (see a trend here?), Georgia Cates, and Danielle from Ink Slinger. I am pretty sure I am in love with Georgia. She is SO FREAKING ADORABLE.

And then the day of the event – Book Bash itself – is kind of a blur. I was one of the volunteers for the event, so my day started at 7am and didn’t stop until we had a dinner break at 6pm. I spent most of that time at Chelsea’s table being her assistant. Which is awesome. We get along GREAT. Plus she makes me feel tall. 🙂

As always, whenever you get such a large group together, there was some drama, but nothing totally epic that needs reporting :-). Some of the cover models (yes there were cover models there) were creepy and couldn’t keep their shirts on (and I really wanted them to, trust me. Not topless material, photo shop is his friend) but others were awesome. Like Paul Marron. He is a gem and very gracious and professional. 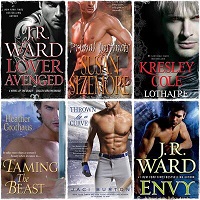 The covers Paul is on. YEAH. THAT GUY.

Paul in the flesh!

I really failed the whole time, I don’t have many pictures. I am in several, but most were on someone else’s phone. I have tried to hunt them down, and posted what I can here. Enjoy! Oh, and of course keep your eyes peeled for a giveaway, you know that’s coming!

Chelsea Cameron in her adorable pie dress, with Christen from Goldilox and the Three Weres!

Karina Halle and Jay Crownover – who is fucking awesome BTW!