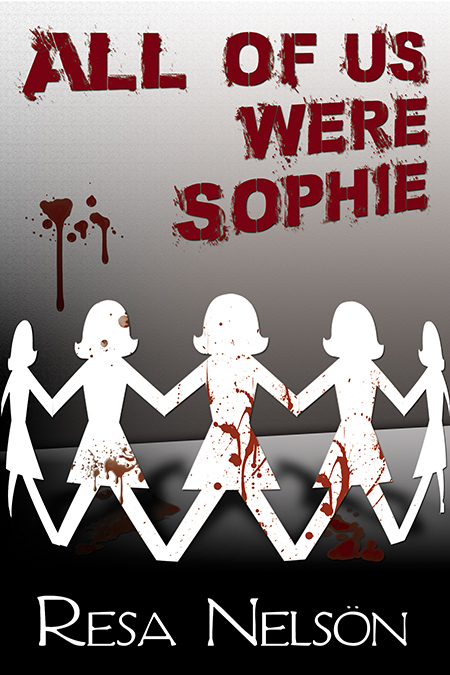 What if the only way you could save your own life was to kill yourself?

Someone is trying to kill Sophie Rippetoe, and she has no place to hide.  But Sophie has a unique option.  Her husband designed and built a duplicator machine to make exact copies of complicated and sophisticated machine parts.  She knows how the duplicator works.

Will it work for people?  No one knows.

There’s just one problem:  the duplication process destroys the original.  The only thing Sophie knows for sure is that trying to make copies of herself will end up killing her.

Sophie isn’t sure who’s trying to kill her or why – but she has her suspicions and has gathered some evidence.  Before she takes the leap of faith to use the duplicator on herself, she creates a trail of clues, hopeful that at least one of the Sophies she creates will figure it out in time to save herself.

Paperbacks
and ebooks are available also from Amazon, and Barnes & Noble

In light of the event I have running all month, Favorite Authors February, I asked Resa to talk about some of her favorite authors. And did she deliver! 🙂

My Favorite Authors and How They  Inspire Me

A lot of authors have inspired me throughout my life.  But for my newest novel, All Of Us Were Sophie, that influence began decades ago.

When I was a little girl, I liked fairy tales, folktales, and ghost stories.  That led me into fantasy, science fiction, and mysteries.  My favorite authors in childhood were Ray Bradbury, Isaac Asimov, and Agatha Christie.  But I also read a lot of Jules Verne, Edgar Allan Poe, and Sir Arthur Conan Doyle, as well as mainstream classics by Louisa May Alcott, Jane Austen, Charles Dickens, and Mark Twain.  Anyone who reads a lot gains an understanding (often a subconscious one) about how stories are put together.  These authors were my first teachers.  I learned what makes characters and stories so interesting that you look forward to spending time with them in the same way you look forward to hanging out with your closest friends.

In early adulthood I read most of Stephen King’s novels and short stories and noticed that I worried about the characters in his books as if they were real people.

In recent years I’ve been reading Harlan Coben, Dennis Lehane, and my new favorite, Gillian Flynn.  I know when I read one of their books I’ll want to finish it in a day or two, so I set aside weekends where I do little more than stay in bed and read.

I like Harlan Coben’s mysteries because his heroes are people I’d like to know and his villains terrify me.  His books are page-turners, and I shake my fist in anger when one of his books keeps me reading past my bedtime – which, ironically, is the type of book I strive to write.  His plots twist and turn, always surprising me.

I like the grittiness of Dennis Lehane’s novels, which tend to be thematically strong and focus on the gray areas of ethics and morality.  My novels may not be gritty, but one of the ways I differentiate my characters is by focusing on what each one of them thinks is moral and ethical – or if they give it any thought at all.

Gillian Flynn’s lead characters are challenging but ultimately likable.  I like the intricate way she pieces a story together like a puzzle that always keeps me guessing.  Even when I figure out what she’s doing, I enjoy studying how she does it.  Some of my characters aren’t easy to like at first, but that’s because I don’t like boring characters.  And the last thing I want to do is bore my readers.

I learn from every author and every novel I read.  And everything I learn has an impact on my own work.  All the science fiction I’ve read led to my coming up with the concept for All Of Us Were Sophie:  there’s a machine that can make exact copies of who you are in an instant, and those copies have your personality and life experience.  All of the mysteries I’ve read helped me come up with a story that I hope will keep you turning the pages and reading way past your bedtime.

Resa Nelson’s first novel, The Dragonslayer’s Sword, was nominated for the Nebula Award and was also a Finalist for the EPPIE Award. This medieval fantasy novel is based on a short story first published in the premiere issue of Science Fiction Age magazine and ranked 2nd in that magazine’s first Readers Top Ten Poll. The Dragonslayer’s Sword is Book 1 in her 4-book Dragonslayer series, which also includes The Iron Maiden (Book 2), The Stone of Darkness (Book 3), and The Dragon’s Egg (Book 4).

Resa’s standalone novel, Our Lady of the Absolute, is a fantasy/mystery/thriller about a modern-day society based on ancient Egypt. Midwest Book Review gave this book a 5-star review, calling it “a riveting fantasy, very highly recommended.”

She has been selling fiction professionally since 1988. She is a longtime member of SFWA (Science Fiction and Fantasy Writers of America) and is a graduate of the Clarion SF Workshop. Resa was also the TV/Movie Columnist for Realms of Fantasy magazine for 13 years and was a contributor to SCI FI magazine. She has sold over 200 articles to magazines in the United States and the United Kingdom.