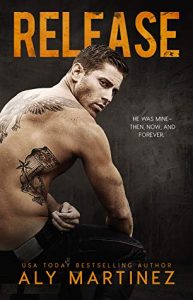 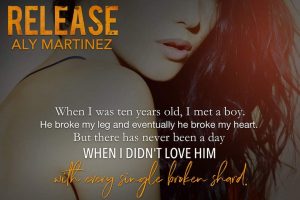 Think back to a time in your childhood where life was carefree and easy. That simple time in childhood was cut short for Thea Hull. After losing her mother, Thea sought out solace under the boughs of a tree. Little did Thea know that another major milestone would happen that day. Ramsay Stewart entered Thea’s life in an epic crash. That colliding of hearts would alter the course of both of their lives.

In spite of Thea’s reluctance to accept Ramsay as a friend, time softened her heart. There were so many ‘firsts’ the duo experienced in life. Side by side, together through it all. Through thick and thin, Thea and Ramsay slowly became a couple. Then a life altering night fell like a shadow upon the duo. An event that had consequences that separated these two for years to come.

Years would drive a fissure between these damaged souls, but Thea remained true to her feelings for Ramsay. Each second, each hour, each day….Thea counted them down until the moment that she would see Ramsay’s face again. In spite of Ramsay’s insistence that he never wanted to lay eyes on Thea again, the broken-hearted girl provided a new life for the sinner. With a determination to escape the remnants of that fateful night, Ramsay quickly learns that getting rid of Thea will be harder than he ever could imagine. With the two in such close quarters, will the guilt from the past ever disappear??

Get ready to dive head first into the latest novel by Aly Martinez – Release!! This tale has alternating points from past to present. Readers will slowly learn how Ramsay found himself torn apart from Thea, and the tragedies that befell the couple so long ago. The past plays such a prevalent part of the history of the couple, and I found myself picturing every nuance that Thea and Ramsay experienced.

While I thoroughly enjoyed the plotline of this novel, I found the ending cut too short for my tastes. There was a repercussion from the past that played a significant part of the story that seemed to just ‘vanish’. I can’t elaborate more without giving away a piece of information that I feel would spoil some of the story. So – just know that I wanted MORE where the ending was concerned, and not a nice neat bow after a story laced with such heartache and perils. All in all – readers will fall in love with this story of redemption, forgiveness, and finding that one true love. 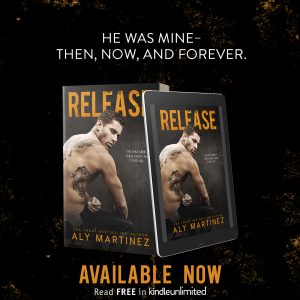 It was funny. I’d spent almost half my life surrounded by the biggest, baddest criminals the state of Georgia had been able to capture. Yet, I was terrified of a five-foot-five woman who for some asinine reason was still in love with me.

I couldn’t be around her. Not if I wanted to keep my head straight and my eye on the prize. I had three years before I got off parole. I needed to get a job, tuck away some cash, and, the second I was allowed to leave Georgia, get the hell out of there. Maybe, if I was lucky, I’d be able to convince my sister to come with me. We didn’t have to go far. We could stay in the south if she wanted. South Carolina, North Carolina, Alabama, Tennessee—there were schools everywhere. Nora wouldn’t have trouble finding a job. The hardest part would be convincing her to leave Thea.

However, maybe if she did, Thea would finally move on with her life and stop obsessing about me.

I’d known they lived together for a while. I didn’t want anything to do with Thea while I was locked up, but I was happy as hell Nora had someone to lean on. I had been under the impression that Nora had gotten her own place when she found out about my release. I had been under that impression because Nora had straight-up told me she was getting her own place after I’d declared there was no way I was living with Thea.

Now, I was hiding in my room, waiting for Nora to wake up, open my door, and escort me to breakfast like a damn bodyguard so I could avoid confrontation.

Next up in my efforts to kill time was a workout. Sit ups, push-ups, planks, running in place. This was when I realized Nora hadn’t bought me any deodorant.

Another naked lap around the bedroom, and this time, I managed to keep my hands off my cock.

Finally, I got dressed. This required me to pick through a bunch of preppy shit Nora had bought for me to find tattered jeans and a fitted green tee that clung to my chest like a damn glove. In my closet, I found a belt and a pair of distressed brown lace-up boots that maybe could have doubled as combat boots if the war was taking place on a runway. But what the hell did I know about style? I’d been wearing orange or puke beige for almost half my life.

When I was done with all of that and there was still no sign of Nora, I sat on the edge of the bed and decided to give the phone thing a try. I wasn’t totally out of the technology loop. We had computers at the library and we were allowed to use them if we earned the privileges. But they might as well have been dinosaurs compared to the phone she’d bought me. I couldn’t even get it to read my face with the fancy secret laser thing. I gave up trying pretty quickly.

So there I was, bored out of my mind, starving, and poking at my newfound wrinkles in the bathroom mirror, when I heard a knock at my door.

I froze, my eyes locked on the mirror, panic staring back at me.

Jesus. I needed to find somewhere else to live.

Leaning out of the bathroom, I stared at the door. If I was super quiet, maybe she’d think I was still asleep and go the hell away.

When I didn’t reply, she knocked again. Her voice was timid and sweet, not at all like the fearless girl I’d grown up with. I hated it.

“Ramsey? You hungry? I’m making breakfast? I was wondering if you wanted something?” Everything from my name to the fact that she was making breakfast was a question, as if maybe she was asking permission to cook in her own house.

My stomach was currently feasting on my backbone. Still, I said nothing.

She sighed. “Okay. Well, if you change your—” There were several seconds of silence.

I quirked my eyebrow at the door, trying to figure out why she’d abruptly stopped talking, and then cursed my inability to develop x-ray vision.

I held my breath, hoping to hear her footsteps as she walked away.

No. Such. Fucking. Luck.

The door swung open and she came walking inside with her hands stacked over her eyes. “Look, I know you’re awake. I heard you running earlier. I also heard you take at least three showers. Sorry, but the house isn’t that big. Neither is the hot water heater. Are you at least dressed so I can open my eyes?”

Brave. Unapologetic. And completely oblivious to boundaries. Now that was the Thea I knew.

“Dressed? Not dressed? Help me out here?”

She kept her eyes closed. “You gotta eat, Ramsey. You can’t stay locked up in this room forever.”

I wanted to tell her to get the hell out again. Honestly, it was on the tip of my tongue. But it never made it past my lips because my traitorous eyes stole a head-to-toe of her lithe body. She was barefoot, wearing jeans—tight ones that tapered at her ankle. They looked like mine in the sense that they had a rip in the knee. They didn’t look like mine in the sense that they hugged the curve of her hips and more than likely her ass too. A pink tank top stretched across her chest, and I swear on my life, fuck x-ray vision because I could see the pebble of her nipples beneath the fabric.

It wasn’t a ridiculous dress.

She wasn’t wearing a face full of clown makeup.

She was just Thea.

The nostalgia pumped through my veins like acid even as my cock stirred. Fuck, I should have jerked off again in the shower.

“I’m dressed,” I bit out, desperate for her to put her damn hands down and maybe use them to cover her tits instead.

Her long, brown lashes fluttered as she opened her eyes. Those fucking eyes had once owned me. As a huge smile lit her face, I felt the claim all over again.

“Oh, look, you chose one of the outfits I picked out for you.”

Of course I had. Of fucking course. As soon as I got her out of my room, I was going to take the outfit off and light it on fire. 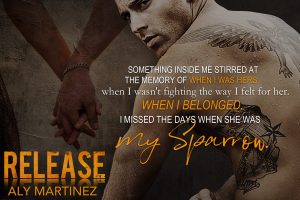