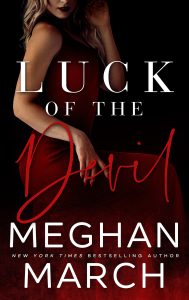 My poker face has always been one of my greatest assets, along with my grit and determination. I was beholden to no one. Asked permission for nothing.

Then Jericho Forge took my life by storm.

I traded my freedom for something infinitely more precious, but I didn’t realize he was holding an unbeatable hand.

Now, all I have to do is survive the high-stakes game that is my life—with my heart intact.

But not falling in love with Forge? That will take the luck of the devil. 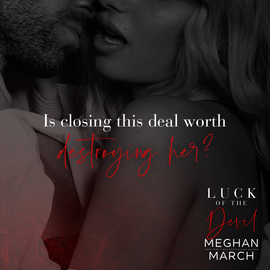 Are you ready to step inside the world of Jericho Forge? It’s a glimpse inside the underbelly of society, and will leave you desperate to uncover the thin line between danger and desperation.  Jericho is a complicated man that knows no mercy where his adversaries are concerned.

With the arrangement that Indy has made with Jericho, a new path has been forged. A path that is shrouded in secrets and deception.  The truth that revolves around the circumstances of an arranged marriage are only a smoke screen to a bigger mystery. Jericho knows that time isn’t necessarily on his side, but he can only hope that to make the most of the time he is given with Indy by his side. With deals and diversions swirling around the couple, the possibility of danger only grows with each passing day.

Two deliciously wicked and sensual characters grace the pages of Luck of the Devil. Each one ripe with the promise of possibilities and uncertainty. Indy demands to keep her independence while playing a dangerous game of cat and mouse, all while enjoying the ‘spoils’ of her recent marriage. So many players are making their roles known in regards to the mystery surrounding Indy’s father. With each revelation a new question will form, leading the lovers on a trail of intrigue and indecision.

While I have danced around the plotline, my intent is to make sure I don’t give anything away in regards to the journey that Jericho and Indy are partaking upon. Expect an interesting bombshell that will leave you with more questions than answers, but isn’t that what you would expect from a man like Jericho Forge?