Welcome to the Jungle.

As America’s sweetheart, Brittany is perceived as the “good girl.” The sort to bring her Bible to a photoshoot… only to garner the attention of a most unlikely suitor. Until one mistake irrevocably changes both of their lives forever. Fortunately, both now and then, Brittany has wonderful support systems, including her tribe.

The leader of the tribe and a model who’s fought every battle and obstacle in the industry, Zoe, knows her worth. Until a sex tape scandal rocks her world. She sees no choice but to put her trust in the one man she shouldn’t, to make it all go away and help her succeed. Unfortunately, not only is he mired in New York’s underbelly, he wants repayment… with interest. Namely, her hand in marriage.

Despite her seemingly perfect life, Everlee has problems of her own. Not only has her world-renowned photographer husband been cheating, but it’s actually much worse than that. The things surrounding what he’s done are so dark and dangerous, Everlee’s life may actually be in jeopardy.

And then there’s Danica, cold, dead in the ground Danica. Some secrets stay hidden while others are just waiting to be discovered- hers has the power to alter the industry forever.

In the world of the Fashion Jungle, it’s easily eat or be eaten… but, if you make it out alive, you just might have a story to tell – though it will likely be one of secrets, lies, deceit, and loss.

Strap on your stilettos, it’s about to get wild.

Based on true stories. 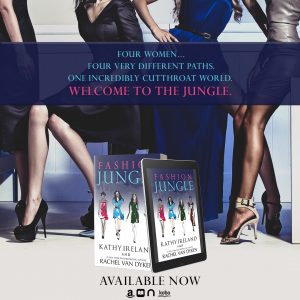 Get ready for a trip into the lives of those who live life surrounded by the world of fashion. Authors Rachel Van Dyken and Kathy Ireland team up to explore a world behind the scenes of the ever changing world of the fashion industry. Murder, stalking, starvation, and glimpses into the personal lives of the characters will lead readers on a journey into a world that few have the privilege of glimpsing.

With a murder that starts off the novel, Fashion Jungle dives into the lives of multiple characters during the chaos of Fashion Week in NYC. Instead of following the chaos with the point of view from one of the characters, there are various 3rd person point of views that are not always easy to understand. At multiple places throughout the book, the characters will change without any indication that the narrative is different. This resulted in a lot of rereading to understand whose eyes were examining the situation at hand.

The prologue was intense and offered a glimpse into an exciting revelation to unfold. However – the first third of the book seemed to fall flat after such and engaging prologue. The last portion of the book really amped up in intensity, giving readers a chance to feel more invested in the storyline. In fact – I felt like the book would have been even more engaging had Ireland presented her escapades in the modeling world in a type of memoir instead of creating this chaotic world of fiction.

I have to say that Brittany stole the show when I look back at the different characters. Her story was the most believable and interesting. Although – Dane was a bit enticing. I don’t feel like readers had the full scope of just how devious Dane’s character could actually have played out. With so many lives intersection in the Fashion World – readers will enjoy a resolution to all of the modeling mayhem. 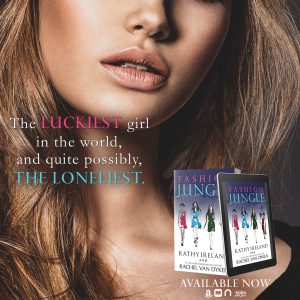 “I think I may come here every night.”

“Be my guest,” Dane said, looking away as if he were bored; when in reality, his heart was racing.

Frederick would crack. His shirt was open now, his eyes closed. The habit would continue as it always did. Wouldn’t it?

All men eventually did when it came to Dane.

The ones who didn’t, well… they weren’t alive to say otherwise, now, were they?

“Have fun.” Dane stood, patted Frederick on the back, and shared a knowing look with the woman currently straddling the man’s lap. “Make it worth his while but remember our rules.”

Dane shoved the guilt aside as he walked off.

The guilt of what this would do to Everlee.

Then again, Everlee didn’t know what he did.

That he wasn’t who she thought he was.

Then again, nobody really did.

Because he’d collected everything he could on Frederick for a year and was less than impressed by the sort of man he was.

“Interesting club,” Ronan said once Dane reached the bar. He was flanked by two bodyguards.

“They aren’t necessary,” Dane said in an unemotional voice, pointing to the security. “No weapons allowed, no fighting, only pleasure.”

“And yet, here you are, talking to me.” Ronan leveled him with a glare. “What do you want, Dane?”

“Is that how you speak to an old friend?”

Ronan let out a snort. “We’ve never been friends. We’ve only tolerated each other because of the girls.”

It was how they all referred to Brittany, Everlee, Zoe and Danica. Pain sliced through Dane’s heart, he couldn’t even say her name in his head without feeling it everywhere, all the way down to the marrow.

They were women now.

Girls who’d grown up too fast.

Females who were still fighting their way through the jungle of New York, barefoot and bleeding with fake smiles and deadly secrets.

“I need you to keep him in jail,” Dane said under his breath. “They say he’s getting out on good behavior.”

Ronan muttered a curse. “Let me guess, you want me to go have a golf game with the DA?”

“If you think that would help.” Dane tilted his head and narrowed his eyes on the politician, the man he used to trust as much as everyone else before Dane’s world came crumbling down around him by way of his sister’s death. “Then, yes.”

“Fine. This makes us even.” Ronan tried to walk off, but Dane grabbed him by the elbow and held him there, whispering in a low voice, “I will never be done with you… tell the former first lady hello. I loved what she was wearing while shopping on Fifth Avenue yesterday, the white made her look so innocent.”

Ronan let out a filthy curse and walked off.

Dane stared out across the club as a feeling of calmness washed over him. Chess pieces had been moved.

Now, he would wait. 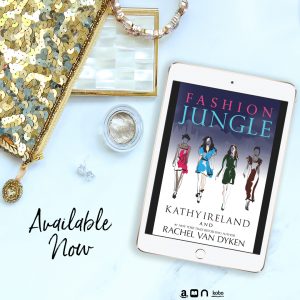 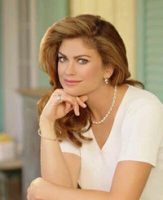 Kathy Ireland, Chair of kathy ireland® Worldwide (kiWW®), is a fashion and home industry icon, whose unprecedented, American entrepreneurial success, inspired the term, model-preneur. kiWW® is owned solely by Kathy’s family trusts. Kathy’s first novel, Fashion Jungle, is co-authored with #1 New York Times Bestselling author, Rachel Van Dyken. Kathy entered the “jungle” as a teenager, sheltered by loving parents, John and Barbara, of Santa Barbara, California. Covers of Vogue, Teen, and Cosmopolitan, led to a record 13 issues and all-time bestselling cover of Sports Illustrated Swimsuit. Kathy is the supermodel turned supermogul, hailed by Harper’s Bazaar as the most successful “model in the world.” kiWW® launched a single pair of socks, during Kathy’s first pregnancy. While selling over one hundred million pairs, retail expanded. kiWW® develops for home, office, fashion, luxury jewels, vacation destinations, weddings, lighting, flooring, furniture, personal care, media and more. After billions of dollars in sales, kiWW®, a private company, was reported on by Forbes. Kathy’s story continues in global media, including three Forbes covers (two USA, one Asia), Inc., Wall Street Journal, Cheddar, Success Magazine, television, and online. Kathy’s speaking events occur in America, the Middle East, Asia and beyond. Kathy Ireland and Greg Olsen, are parents to Lily, Chloe, Erik and his wife Bethany, their daughter-in-love. Kathy’s philanthropy includes: women and children’s health, HIV/AIDS, Education, human freedom, life, wars against religious persecution and violence. Kathy is a Board Member of the NFLPA, WNBPA, and an Ambassador and donor for the Elizabeth Taylor AIDS Foundation. Kathy’s survival in the jungle is because of a personal relationship with Jesus Christ, His inerrant Word, and The Gospel, which is the Good News of Christ, crucified for all sins. Kathy believes everyone is loved by Jesus Christ, without any exceptions.