by Rachel Van Dyken
Also by this author: Elite, ,
Also in this series: , , 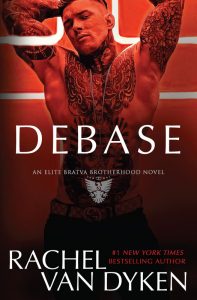 Debase, the final book in the Eagle Elite Series and the first new book in the Elite Bratva Brotherhood by #1 New York Times Bestselling Author Rachel Van Dyken is Live!

With blood on my hands, I held her.

With death in my soul, I took from her.

With the devil in my heart, I coveted her.

There are many definitions of Hell.

Tonight I was adding something new to the very top.

She arrived on my birthday, the same day, every year, I play Russian Roulette and pull the trigger.

She was my omen.

She made it personal.

And for the first time in my life, I gave in.

A virgin mob boss with no soul.

My name is Andrei Petrov.

They call me the devil.

All I want is for the pain to end.

All she wants is for me to share it.

I am the last remaining heir to a dynasty that should burn in Hell.

And my last wish remains for it to die with me. 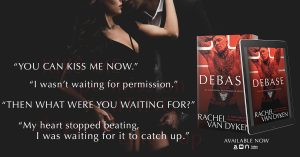 One person’s touch can cause a explosive reaction that the world has yet to experience. Andrei Petrov has the weight resting upon his shoulders. A family legacy that is tainted by death and destruction only pushes Andrei’s standing in mafia. Determined to track down those responsible for the stolen souls that make their way to the club, Andrei crosses paths with captive number 632.

The minute Alice walked through the doors of Andrei’s club a twinge of relief swept over her. No more fear of what her brother and those in the De Lange family had in store for her fate. What Alice didn’t know was just how big her role would be in the course of family business. The moment Andrei set eyes on 632, he realized that Alice was more than her legacy. Breaking his own rules, Andrei pulled Alice into the world of the Petrov family.

The consequences of letting down his guard will follow Andrei through the war that is brewing between the families. Through it all, Andrei knows that Alice is the calm to the monster that resides in his soul. Can Andrei sacrifice a war between families for the awakening within his soul?

The tide will turn in Debase – the latest installment in the Eagle Elite series. With their time in jeopardy, the De Lange family will do whatever it takes to overcome the target Mil placed on their shoulders. Stuck in a battle that neither asked for resides Alice and Andrei. These two tortured souls will try to balance family loyalty and the sins of their fathers while uncovering their desires.

Debase might end the Eagle Elite Saga, but it is also the first in a new series titled Elite Bratva Brotherhood. Rachel Van Dyken has closed this chapter with all the bravado that one would expect from the mafia families. Andrei and Alice’s story was the perfect touch to ending one chapter and the revealing of the beginning of an exciting new saga. As with all Eagle Elite novels, expect the unexpected. Alice and Andrei will definitely take you on a ride that is truly unforgettable!! 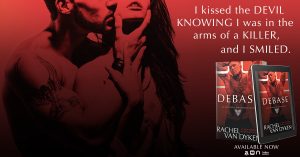 I slid my tongue into her mouth. I tasted, I took, I was greedy with each kiss. With blood on my hands, I held her.

With death in my soul, I drank from her.

With the devil in my heart, I coveted her.

My gloves felt too hot for my hands.

My hands too big to contain the weeping leather as I pulled away from Alice and stared into her big blue eyes.

“You don’t want this,” I whispered.

She bit down on her swollen lip and reached for me, I stood still as her warm hands touched both of my cheeks. “Lie.”

“I can’t do that.” I needed to stop doing that.

That I was above this.

That no woman had ever owned me.

No woman had ever taken everything.

My chest heaved as I stared at her mouth, unable to move, completely rooted to the floor.

Alice moved her hands to my jeans and slowly unbuttoned them. I didn’t stop her, I needed to fucking stop her, but it was like I’d drank this paralyzing poison from her lips and couldn’t function, could only watch her as my soul floated above my body, mocking my inaction, telling me that this would be the end of me.

I would give her everything.

And then I would lose control.

“Alice…” My voice cracked. “I wish…” Her hands stilled on my jeans like she was ready to pull them down. “I can’t. I wish I could. I can’t.”

How could she possibly understand?

How could I explain the gut-wrenching fear of looking in the mirror and knowing that one choice kept me sane. One choice.

And that was sex.

He’d made that choice.

Someone so very… perfect.

Without blinking, Alice gripped my jeans, indecision etched on every pretty part of her face.

I gripped her wrists with my hands and pulled them away from the very real temptation of getting completely naked and sinking into her, feeling her clench around me, her tight heat.

I pulled her into my arms, and she rested her head on my shoulder. Just because I couldn’t let her touch me, couldn’t cross that line, didn’t mean I couldn’t make her happy, I would kill to watch her face in the throes of multiple orgasms.

I quickly gripped her by the hips and put her up on the cold granite countertop.

“Andrei what are you doing?” She looked down at me uncertainty in her blue eyes.

I moved my hands to her ass and pulled down the black leggings she’d been wearing, all the way down to her ankles, right along with a pair of lacy underwear that were bright pink, and perfect.

“Seriously, what are you doing?”

I gripped her knees with my hands and then spread them wide. “What’s it look like I’m doing?” I smirked. “I’m feasting.”

Never underestimate a virgin with an extremely vivid imagination and heightened sexual appetite.

I wasn’t a fucking monk.

I would like to think I knew more than most men, because I’d seen it all, watched it, inadvertently studied it.

If someone gave me a diagram of a woman, I could point out over twenty-two ways to get her off — with my tongue, a feather, my fingers, take your pick.

“You don’t have to—” She let out a gasp, gripping the edge of the granite, turning her hands white.

I chuckled darkly against her right thigh and bit. “I’m sorry, what was that? I don’t have to?”

“Tell me,” I asked gently before I dipped my tongue inside her and flicked.

“Never,” she rasped. “You.” That word was like a gunshot going off in my soul. “Only you, Andrei.”

“Me.” I flicked my tongue again, and gripped her by the ass, pulling her almost completely off the counter while I sat beneath her and sucked her off in the most primitive aggressive way I knew how.

With every ounce of energy I had in my physical body.

I used every weapon in my arsenal. 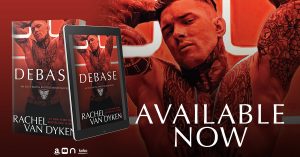