I received this book for free from Blog Tour, Net Galley, the Publisher in exchange for an honest review. This does not affect my opinion of the book or the content of my review. 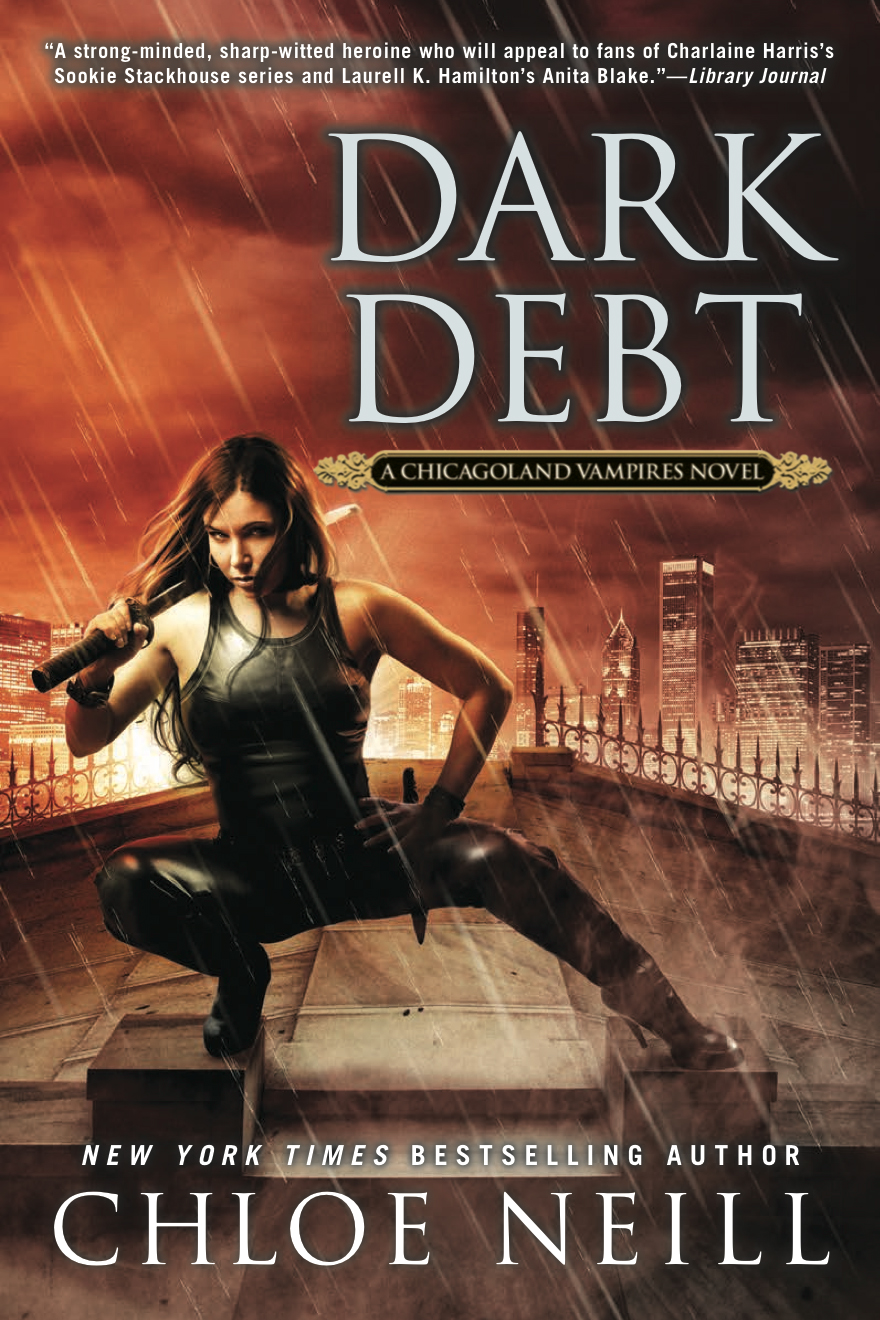 A vampire never gets old. But neither do his enemies. When a figure from Ethan’s dark past makes a splashy debut in Chicago, Merit and her Master don’t know whether he’s friend or foe. But they’ll have to figure out soon, because trouble is brewing in the Windy City.

At an exclusive society soiree attended by the upper echelons of the human and supernatural worlds, Merit and Ethan barely stop the assassination of a guest. When the target turns out to be a shady businessman with a criminal edge, Merit suspects a human vendetta. But the assassins have fangs….

The connections to Chicago’s Houses go deeper than Merit knows, and even one wrong move could be her last….

I was so excited when I was accepted to be a tour host for this blog tour. I am absolutely in love with this series, for a multitude of reasons. The characters, the plot, the humor, the romance, Chloe Neill wraps each book up into perfect little reader bows for us and always leaves us hanging in the end. And Dark Debt is no different. I was worried I’d miss something if I didn’t read Lucky Break, but in Dark Debt things are only hinted at from LB.  Which makes LB worth reading. I had some worries about this book, the series is now at book 11 and I’ve noticed the longer a series tends to go on, with the same main characters, the less I am to care about the characters and the more I feel like the plot is being repetitive. But I officially have no more worries when it comes to Chloe Neill. She has not only made me fall in love with her characters, but every book is so completely different, that I don’t think while I”m reading, “This old song and dance?” Every book is it’s own. I’ve also had the good fortune of meeting Ms. Neill on two separate occasions and she is wonderful and funny. So not only would I give Dark Debt 5 Stars, I honestly can give her whole series 5 stars. If you have yet to pick up this series I would highly recommend it!

What is the Grand Prize Giveaway prize?

And not only is Chloe giving away this super sweet package, she sent me an individual prize pack for one lucky winner!!!! Included in my prize pack is a SIGNED UK copy of Biting Bad (which I love the US covers, but the UK ones are pretty cool too.), A Chicagoland Vampires pen, Bookmarks, a Lanyard, and an I Survived Hard Bitten button

Chloe Neill is the New York Times and USA Today bestselling author of the Devil’s Isle, Chicagoland Vampires, and Dark Elite series. She was born and raised in the South, but now makes her home in the Midwest. When not writing, she bakes, works, and scours the Internet for good recipes and great graphic design. Chloe also maintains her sanity by spending time with her boys–her favorite landscape photographer/husband and their dogs, Baxter and Scout. (Both she and the photographer understand the dogs are in charge.)

Chloe is represented by Lucienne Diver of The Knight Agency. Chloe is a member of the Romance Writers of America.

Photo by Dana Damewood. (If you use this photo for promotional purposes, please credit Dana.)