by M.E. Carter
Also in this series: ,

Living with her mother seemed like a good idea at the time. But Elliott Donovan’s living arrangements are not working for her anymore. Desperate to get back on her financial feet after a divorce and out from under her mother’s thumb, Elliott takes a job in the child care center at Weight Expectations, a local gym.

It has everything she needs – family friendly hours, more pay than she expected, and a super cute trainer who just happens to have part of his house for rent.

Abel DiSoto was living the good life until his wife walked out taking half of the family income with her. The blow to his ego was bad enough, but after a fire at the gym scattered Abel’s clients, and consequently his commissions, he’s stuck figuring out how to make ends meet, too. Renting out the master suite of his house to his new co-worker seems like an easy solution. They’re both mature adults, they both have eight-year-old daughters, and their work schedules coordinate so they can lend each other a helping hand to ease the burden of single parenthood.

The only downside? Living like a blended family when you’re not actually a family can present some challenges.

Welcome back to Weight Expectations, where the unexpected is likely to happen.

‘Cutie and the Beast’ is a full-length contemporary romantic comedy.

Knitting in the City World of the Penny Reid Book Universe.

No one plans to ‘start over’ in their life. Sometimes it just can’t be avoided. For Abel – the reality of being a single dad is constantly weighing on his shoulders. After his wife walked out of their marriage, Abel found himself trying to balance being a father, holding down a full-time job, and paying the bills. With trying to balance so much, Abel finds himself overlooking many of his daughter’s discipline problems. The main thing Abel concentrates on is being present in his daughter’s daily life.

When dealing with divorce, no one expects to move back home to live with their parents. That is exactly the way life turned out for Elliott after the demise of her marriage. Determined to make a better life for her daughter, Elliott knows that insurance and a paycheck need to reside hand in hand. Sometimes living in her childhood home is more than Elliott can shoulder, but it is definitely a way to make sure that Elliott’s daughter has the things she needs in life.

When Abel and Elliott figure out that they have a lot in common, a friendship is formed. The two are both employed at Weight Expectations and have a mutual respect for the other. As they find themselves trading off responsibilities for their children, Abel and Elliott quickly realize that there is more to their friendship than meets the eye. As their mutual interests continue to intertwine, the duo is faced with the reality that there is more to this partnership than either planned. How will they move forward while maintaining their work and home lives?

Cutie and the Beast is the latest addition to the Cipher Office Series in the Penny Reid Universe. Let me start by saying I couldn’t wait to get my hands on Abel’s story. After all – we learned a little about him in previous books and he was so mysterious. First impressions of the book kept me glued to my reader. Uncovering the layers to Abel’s life held a lot of anticipation for me as a reader.

Elliott is a true example of the sacrifice that we see from single moms everywhere. However – once Elliott and Abel begin their friendship, things began to move in a downhill direction. The second half of the book did not hold the same intriguing quality that I felt in the beginning of the novel. The interactions between Abel and Elliott didn’t quite ring true. Their relationship felt forced and wasn’t completely believable. The Abel we met earlier in the series just didn’t match the man that had his life laid out in Cutie and the Beast.

There were humorous moments that made me sway on how to rate this book. Moments where I thought ‘this is great’, but the lack of connection for the entire second half of the book ruled out in the end.

In my haste to not be late, I barrel right into a woman coming through the front door.

Grabbing her arms to steady her from falling, I apologize profusely. “I’m sorry! I didn’t see you. Are you all right?”

Smiling tightly, the blonde isn’t thrilled a random stranger practically ran her over. But she’s polite anyway. “I’ll be fine.”

“Are you sure? You aren’t hurt?” I don’t think she is, but sometimes I don’t know my own strength.

This time her smile is a little more genuine. “I’m sure. You sure are in a rush.”

Letting go of her arms, I feel like she needs an explanation other than me racing around like an idiot. “I’m the one parent who has a tendency to be late for school pickup. The lady at the front desk gives me a nasty evil glare if she has to call me.”

This woman, whose name I still haven’t bothered to ask, laughs and I’m struck by how cute she is. She’s definitely a few years older than I am, but not by much. There’s nothing about her that necessarily stands out in a crowd, but her smile is genuine. This is a woman who likes to laugh and have fun. I always gravitate toward those people, which gives me a fleeting thought: I should have noticed my ex-wife hardly ever smiled for real. Laughing was even rarer unless it was at someone else’s expense. Those should have been easy indicators she wasn’t the one for me.

“Do not mess with Ms. Alexander’s routine. She will cut a bitch.”

My laugh comes easily, and I find myself hoping this woman is a new member. She’s funny. I love it when clients have a sense of humor. Offering her my hand, I introduce myself. “I’m Abel. Trainer here at Weight Expectations and father of Mabel in second grade.”

She places her cold hand in mine. “Elliott. Interviewee for the childcare position and mother of Ainsley, also in second grade.”

“Ah! Well it’s nice to meet you. Fingers crossed I’ll see you here later as a fellow employee. And if not here, at Parker Elementary as a fellow parent. Hopefully not in Ms. Alexander’s line of sight.”

Elliott holds up her gloved hands and crosses her fingers around each other. “Wish me luck. Now run fast.” 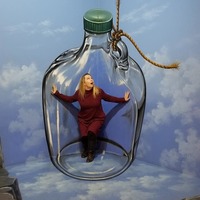 My name is ME Carter and I have no idea how I ended up writing books. I’m more of a story teller (the more exaggerated the better) and I happen to know people who helped me get those stories on paper.
I love reading (read almost 300 books last year), hate working out (but I do it anyway because my trainer makes me), love food (but hate what it does to my butt) and love traveling to non-touristy places most people never see.

I live in Houston with my four kids, Mary, Elizabeth, Carter and Bug, who was just a twinkle in my eye when I came up with my pen name. Yeah, I’ll probably have to pay for his therapy someday for being left out.