by Karla Sorensen
Also in this series: , , 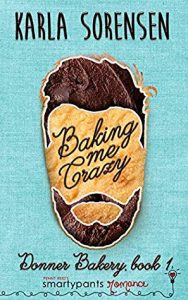 I’m Levi Buchanan, and until five years ago, I thought the legend of my family’s curse was a load of crazy, Southern nonsense.

No curse can make you fall in love at first sight. No curse can force a true, deep, passionate, all-consuming love that will haunt you all the days of your life.

Then I met Jocelyn Abernathy and I realized how completely wrong I was.

The problem is, Jocelyn guards her feelings like well-armed soldier. She’s the most beautiful, stubborn, infuriating woman I’ve ever met. Every time she talks, I want to kiss the living daylights out of her. But I can’t.

Because when we met, she didn’t need true love. She needed a best friend. And that’s what I’ve been to her… for five years.

But when Jocelyn meets a handsome stranger her first day working at Donner Bakery and she lets him buy her a dill pickle cupcake, I realize with ominous regret that I may have missed my window with my best friend.

If I can’t get her to see past our friendship, my new curse may be to watch the love of my life move on with someone else.

‘Baking Me Crazy’ is a full-length contemporary romantic comedy, can be read as a standalone, and is book#1 in the Donner Bakery series, Green Valley World, Penny Reid Book Universe. 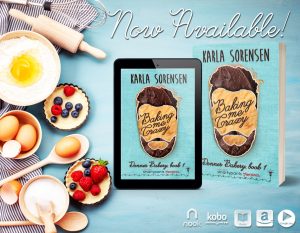 Imagine a family curse hanging over your love life. For Levi Buchanan – the reality of this supposed curse is really just a figment of the imagination. Or is it? The day that Levi met Jocelyn Abernathy, he knew there was more to this family curse than meets the eye. How can one man find the love of his life the very first time he lays eyes on the woman that he is suppose to marry?

Jocelyn has gone through a life changing event that has set the course of her future. With so many obstacles in the way, Jocelyn finds herself pulling back from anything resembling a relationship. In spite of Levi’s request for a date, Joss turns him down and requests to remain friends. As best friends, Levi and Joss experience all the trials and tribulations in the other person’s life. Then one day, the tides turn due to Joss’ attraction to a man she meets in the bakery. Now – the tides are turned and Levi cannot just stand on the sidelines any longer. What does stepping out of the ‘friend zone’ mean for these two ??

Baking Me Crazy is the FIRST book to release in the SmartyPants Romance series. All books in the collection are connected to Penny Reid’s wildly popular series, and fans are itching to see what transpires. I will start by saying Karla Sorensen is a ‘new to me’ author. So – I went into this novel blindly. The only thing I knew was the fact that this book would center on the Donner Bakery that made its appearance in the Winston Brothers series.

When a book is introduced to the reading world as having a plot that takes place in another author’s world, I think there are plenty of expectations that may or may not be met. The plot of Baking Me Crazy centers around two main characters that are dealing with a possible friend to lovers’ storyline. Joss is not your typical heroine. In fact – she is dealing with obstacles that most individuals cannot fathom. Levi is the hero who loves the girl in spite of her handicap. The two provide a back and forth that leads you to a place where they find themselves at a crossroads in the relationship. Where will they travel? Can they be more than friends? All of those questions will be answered within the novel.

Now – the part of my review that I am in limbo about. When you say you are writing in another authors’ world of characters, I do have expectations of what that should be. Don’t get me wrong….I am not the author, and the creativity that others can bring to the Pennyverse is exciting!! However – if you take the few elements out of the story that center around Penny’s characters, then the story really doesn’t hold its weight in the Pennyverse. Let me explain a step further – if you change the bakery to any other establishment in the country, the story is the same and wouldn’t be in the cleverly crafted world of Penny Reid.

My expectations of what to expect when writing in another author’s world are high. After all – there are some very big shoes to fill when creating new characters in another writer’s world of characters. This realization also made it hard to rate the novel. Karla Sorensen has definitely created two VERY interesting characters with a unique set of obstacles on their path to romance. I really found myself teetering between my view of what was unique and the areas of the storyline that lacked ‘connection’. With the two characters having such a unique set of circumstances with their romance, I just felt some of the novel was lacking the impact that one would expect from this particular couple.

As the first book set in the Pennyverse – Baking Me Crazy is definitely one that will pull you into a brand new series. I definitely have my fingers crossed that the books scheduled to release in the future will only get better and will have a stronger connection (not just working at Jenn’s bakery or passing a character from the Pennyverse). 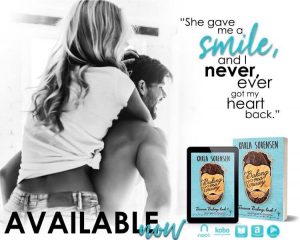 “Besides, this is my best friend perk. Shouldn’t I get perks in baked goods?”

She cut me a look. “You’ve been getting those perks for two years, Buchanan. Don’t even pretend you didn’t put on a solid ten pounds that first year I started baking.” Quite pointedly, she looked at my stomach, which we both knew was covered in muscle.

“That’s rude,” I mumbled under my breath. I flexed my bicep. Nero licked my elbow since it was right in front of him. “Yeah, ten pounds in my left arm maybe.”

The noise she made roughly translated to you are ridiculous. She made that sound at me a lot. Of course, the sad truth of the matter was that I was ridiculous.

Not once in the past five years had my feelings lessened for her. I had just learned to live with them. In my junior year of undergrad, I was taking a class on brain pathology in injuries, and a man came to talk to us about how he learned to live without his right arm after it was amputated.

He told us about how, even years after he lost his arm, his brain still triggered sensations to the limb that was no longer there. The adult brain, in particular, struggled to reorganize after the loss of a limb, and given that four out of five amputees suffer from phantom pain symptoms, some of which were incredibly debilitating, it was a lesson that stuck with me.

I wasn’t fool enough to think that me loving Jocelyn was on par with a man who’d lost his arm, but something about the way he talked plucked at a chord inside me. Sometimes my brain struggled to remember that we were just friends.

She’d never dated, never even hinted that she wanted to. She’d never given me a longing glance. Never stared at my mouth like she wondered what it tasted like.

But my hands never, not once, stopped wanting to reach for hers. My fingers always, always itched to dig into her crazy hair and see what the curve of her scalp felt like.

My brain knew what this relationship was, but sometimes, the signals it sent to the rest of my body didn’t always match up with the truth of our situation. We worked out together a lot, Joss and I, and when she got frustrated with the limitations of her body, I always wanted to wrap my arms around her.

I wanted to pull her into the curve of my body, absorb her dissatisfaction into my skin, and carry it for her. That was the irony when she made noises like that.

She had absolutely no clue how ridiculous I really was.

Karla Sorensen has been an avid reader her entire life, preferring stories with a happily-ever-after over just about any other kind. And considering she has an entire line item in her budget for books, she realized it might just be cheaper to write her own stories. It doesn’t take much to keep her happy…a book, a really big glass of wine, and at least thirty minutes of complete silence every day. She still keeps her toes in the world of health care marketing, where she made her living pre-babies. Now she stays home, writing and mommy-ing full time (this translates to almost every day being a ‘pajama day’ at the Sorensen household…don’t judge). She lives in West Michigan with her husband, two exceptionally adorable sons and big, shaggy rescue dog.