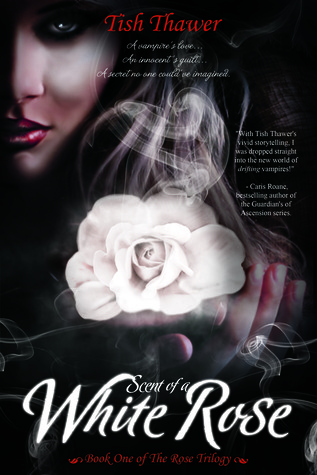 A vampire's love... An innocent's guilt... A secret no one could've imagined. What if vampires were the good guys and a human girl was the one to fear? Scent of a White Rose is a paranormal romance that entices with a heroine that isn't quite what she seems, a vampire whose love story is filled with dark surprises, and a vampire clan whose Sire has lost the ability to inflict

I want to thank my pal Jen – The Book Nympho, for sending this book on to me for review.

Where to begin … these are always the hardest reviews to write. The story kept me entertained enough, but I still had some … complaints? Let’s just jump in with both feet.

I would categorize this as NA (New Adult) because the main character, Rose, is 20, going on 21. Her age is actually really important in the story, because her boyfriend Christian, works at a night club and bar, so she can’t go in. When you first start, you find out that Rose’s mom was killed in a “freak accident” roughly 6 months before where the story starts. Rose had been seeing Christian before this event, and continued to see him after. But I got the impression that she snuck out to see him whenever she got the chance, waited for him outside by his car, they made out on his breaks, then he went back to work, he never came up to see her, and they never talked on the phone – yet they are in love. O_O Ok, dating just under a year is plenty of time to fall in love, it’s just with the way it is written I didn’t get the impression their relationship was more than just making out.

The story itself was kind cute, if REALLY cheesy, and very reminiscent of Twilight in certain aspects. While not the most amazing thing ever written ever, I was still entertained the whole way. Even when I was rolling my eyes at things said or done, it was still with a grin on my face.

Something that bothered me over and over … Rose’s school. She says repeatedly she is in college, and she is writing a thesis (which I thought didn’t happen until higher levels as my BS didn’t have anything resembling a thesis but whatever) HOWEVER she goes to school and comes home at the same time every day, has to ask permission to leave a “study day” in one class to go to the library, is dismissed by bells, and at one point, when she gets in trouble for disturbing class, the teacher says to meet him at the end of the day. All which sounds WAY more like High School than any college I have ever heard of. Again, not a big deal in the scheme of things, but for some reason every time it was brought up it irritated the crap out of me.

There are also several different POV’s (points of view) with which the narrator does a good job distinguishing between. Though the weird “whispering” of the names at the beginning of each section was just … weird. *shrugs* I didn’t think all the POV’s were needed either. About half way in we start getting some from her dad, and another woman you meet later on. I honestly didn’t think either of them were needed for the story. Their sections were always really short as well.

Overall, with the overprotective father (which I didn’t even mention), the immaturity of the MC, and the things that happened … or didn’t … in this story, I think it would have been better suited to a YA (Young Adult) book, rather than have the characters be the ages they were. It would have made more sense. Even with such a low star score from me, I am still curious to see how the story plays out and might continue with this trilogy.