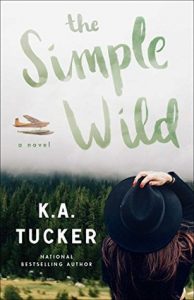 City girl Calla Fletcher attempts to reconnect with her estranged father, and unwittingly finds herself torn between her desire to return to the bustle of Toronto and a budding relationship with a rugged Alaskan pilot in this masterful new romance from acclaimed author K.A. Tucker.

Calla Fletcher was two when her mother took her and fled the Alaskan wild, unable to handle the isolation of the extreme, rural lifestyle, leaving behind Calla’s father, Wren Fletcher, in the process. Calla never looked back, and at twenty-six, a busy life in Toronto is all she knows. But when her father reaches out to inform her that his days are numbered, Calla knows that it’s time to make the long trip back to the remote frontier town where she was born.

She braves the roaming wildlife, the odd daylight hours, the exorbitant prices, and even the occasional—dear God—outhouse, all for the chance to connect with her father: a man who, despite his many faults, she can’t help but care for. While she struggles to adjust to this new subarctic environment, Jonah—the quiet, brooding, and proud Alaskan pilot who keeps her father’s charter plane company operational—can’t imagine calling anywhere else home. And he’s clearly waiting with one hand on the throttle to fly this city girl back to where she belongs, convinced that she’s too pampered to handle the wild.

Jonah is probably right, but Calla is determined to prove him wrong. As time passes, she unexpectedly finds herself forming a bond with the burly pilot. As his undercurrent of disapproval dwindles, it’s replaced by friendship—or perhaps something deeper? But Calla is not in Alaska to stay and Jonah will never leave. It would be foolish of her to kindle a romance, to take the same path her parents tried—and failed at—years ago.

It’s a simple truth that turns out to be not so simple after all. 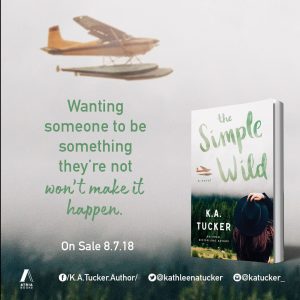 As a child, Calla’s mother decided the harsh reality of living in Alaska was too much to bear. Wren loved the wilderness and had no plans to leave the rugged life in Alaska. So – Calla’s mother packed them up and headed to a new life in Toronto. There wasn’t a lot that Calla could remember about Alaska at 2 years old. A life left behind that holds so much depth to Calla’s past.

Fast forward to Calla’s current situation. Any 26 year old should be having the time of their life. For Calla – the reality of today’s work force has left her jobless. The boyfriend that should have been the one to lean on in a time of crisis was a huge ‘letdown’. Things become a little more insane when Calla learns that the father she never knew is declining in health. With a nudge from those that love Calla, the decision is made to head to the unknown land of Alaska to spend time with the father she never knew.

Nothing could prepare Calla for the rough edges that pull at the Alaskan wilderness. Not the stories that she heard from her mother or the information Calla could Google would live up to the reality of what she uncovered. Like turned upside down the moment that Jonah, a pilot for her father, came to pick up Calla and fly her to Wren’s home. The two were as opposite as they come. Yet – both found they couldn’t ignore the pull that existed between them. With Wren’s health on the decline, would the father and daughter find a way to overcome the years of absence? What part would Jonah have in Calla’s life during such a quick trip to Alaska?

When diving into a KA Tucker novel, you know that you will head on an adventure that will transport you into a story plot that will captivate you. The Simple Wild was no exception!! Calla is a character that you cannot help wanting to explore. Her situation is unique and holds a ring of truth that anyone can relate to. It’s not every day you head to Alaska to reconnect with a parent!!

Jonah….what an exciting and interesting hero!! The strength, knowledge, and hot factor about Jonah….well….you can’t help wanting to learn more about him! The back and forth banter between Jonah and Calla was exceptional. I loved the way their romance built upon the main focus of the story.

While this is a romance, I think the premise of this whole book is amazing. It’s a journey of forgiveness, trust, and uncovering the truth about the different paths we choose in life. Wren embodied what so many individuals face in life….the reality of mistakes that are made and how we choose to deal with them when the time comes. The Simple Wild is definitely a book that will hold a special place in your heart!! Kudos to KA Tucker for writing an amazing book that embodies the reality of life!