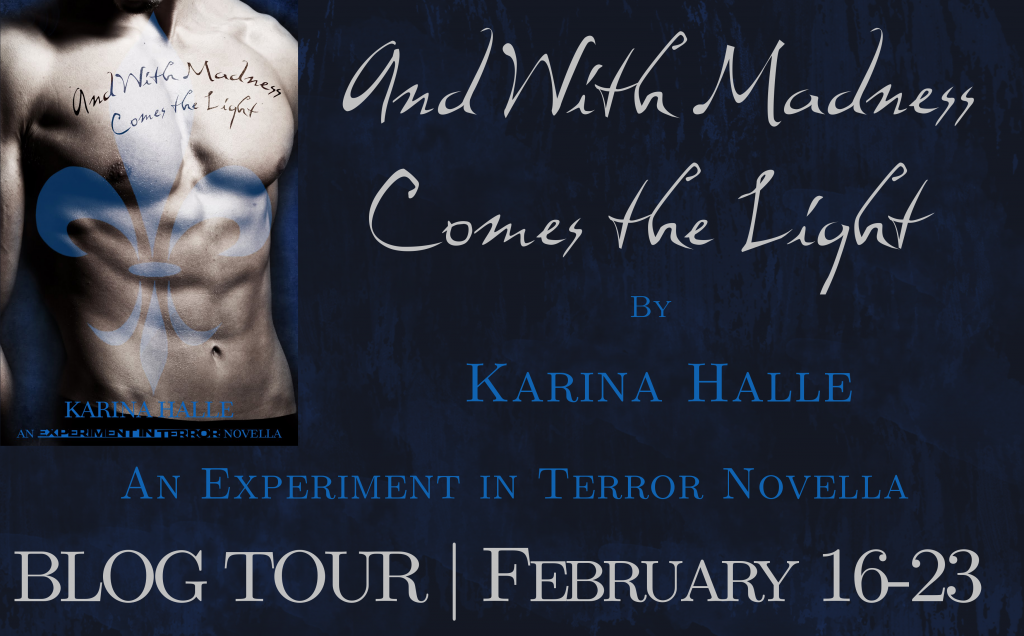 The Man. The Mystery. The Madness.
Dex Foray has never been anyone’s fool – until he missed his chance for happiness with Perry Palomino. Broken and alone, Dex has no choice but to rise from the ashes Perry left behind and find his own path to redemption. But nothing in Dex’s life has ever come easily, especially when there’s a dark madness waiting in the wings.

Told from Dex’s POV, And With Madness Comes the Light is short story/novella that spans the time period from the end of Lying Season (Book #4) until the end of On Demon Wings (Book #5). If you were ever wondering what really happened to Dex while Perry was gone – his journey to Dex 2.0 – now is your chance.

Let me say yet again how much I love this book cover. I need a poster. Maybe Halle has some that she can bring in June 🙂 *hint hint* You can enter for your chance to win a bookplate at the end of this post. I mean, look at that cover. I want one.

So technically this is novella #6.5 in the Experiment in Terror Series, but it takes place between Lying Season and On Demon Wings. So it could be read out of order, between On Demon Wings and Into the Hollow. It is Dex’s side of the story, and what was going on with him while he was missing during part of Perry’s journey in book 5.

So I knew, for the most part, what was going to happen. And it still tore me up inside. Dex has grown from the pervy weirdo we fell in love with to the mature, do anything for the woman he loves, pervy weirdo we would all leave our husbands/boyfriends/girlfriends/wives (yes I went there – he could get you to switch teams) for.

Part of me was glad he was miserable, for what he had done to Perry. He was a DICK. When all that went down I couldn’t believe it. I just … it was bad. But the majority of me wanted to run to Seattle, find his apartment, and crush him to me, rocking him while he cried, and tell him everything would be ok. I don’t think anyone deserves that much pain. It was rough to go through with him.

He is honorable, loyal, and REAL. You get an even more in depth look into his psyche than you do in The Dex Files. And his reaction to certain revelations we all were DYING to know when we first found out? HOLY CRAP. Not at all what I was expecting. I bawled like a baby.

The intensity of his love for Perry is best described by himself. When asked by a friend if he loves Perry, his response is:

“Yes,” I told her, looking her straight on, my heart banging in my chest. “I love her, more than anyone should love anything. The kind of love that either fills you up or eats away at you. I love her at my own risk. I love her … dangerously.”

Oh hell. Even reading that now, several days after putting this novella down, my stomach does flip-flops. This is not a book you should read if you are not at least through On Demon Wings, so don’t even try. You will be so confused and it will ruin lots of things for you. But on the same note, if you haven’t started this series, what are you waiting for? Getting into Dex’s head is enough of a reason to read it. But not the only reason. If you aren’t familiar with my EIT obsession, check out my reviews. Books 1-5, Old Blood, The Dex Files, Into the Hollow, and my interview with Dex.

I bet you can already guess this is getting 5/5 from me. This is one of those novellas that stays with you after you have put it down. If I were a more emotional girl, I would tear up in public every time I thought about it. Good tears.

One of my pet peeves in literature are stories involving insta-love. I’m not saying that I don’t understand why people like to read about such relationships – after all, Romeo and Juliet was terribly romantic in that regard. You know, before they both killed themselves for no good reason. But when it comes to the real world, I like to read and write about characters that take their sweet time. I like realism in my fiction because it gives you something to relate to and something to hope for.

Some of my favorite fictional couples include Mulder and Scully from The X-Files, Booth and Bones from Bones, Jane and Mr. Rochester from Jane Eyre. These couples were wrought with friction and loaded glances as the series or book went on. They were the epitome of sexual tension, of denying what they truly wanted, of getting to know someone first before love took hold of them. I love it when that sort of passion and love just sneaks up on a character, taking them by surprise. It’s not only realistic but it’s so much damn fun waiting for these characters to get a clue. I was one of the biggest Mulder and Scully shippers when I was young, analyzing every little touch, every look. You KNEW these two loved each other and found each other attractive and I was hooked, week in and week out, on the edge of my seat, waiting for the ante to be upped. It didn’t happen at first but it when it did – wowza. Talk about addicting.

To be honest, if a couple meets and falls immediately in love, that’s a huge turn-off for me. That takes away the tension and the fact that they don’t actually know each other. Sure, lust happens all the time and I’m totally cool with it being passed off as such. But instant love? What’s the fun in that? The only way to maintain intensity and interest in those kinds of stories is to throw in a huge wrench into their relationship. And sometimes that works like a charm (I do like those stories too, on occasion). But there’s something about waiting and wishing for that BIG moment that really gets me and I know my readers love it, too.

That said, I personally do believe in love at first sight. Ironically, it pretty much happened to me and my fiance when we first met. We just knew we were supposed to be together and I was head over heels in no time. And that’s me, the girl who’s constantly told that she “thinks like a dude.” But even though it happened to me, doesn’t make it all that realistic – it’s still a fairly rare occurrence. And while I’m overjoyed to be in my own fairly tale romance, it doesn’t mean I’d like to read about it. I want to test my characters and their relationship with each other before anyone’s spouting “I love you.” I want to put them through hell and back before they get their reward.

Hey, it’s just the romantic in me.

And onto the Giveaway! The giveaway will run from midnight on February 15th through midnight on February 24th (Central Standard Time).  There will be 10 winners.  Once the winners are chosen, they will be contacted at the email address they entered in the Rafflecopter.  Each winner will have 48 hours to respond.  If a winner does not respond within that time period, an alternate will be chosen.

11 Responses to “Book Tour: And With Madness Comes the Light by Karina Halle”